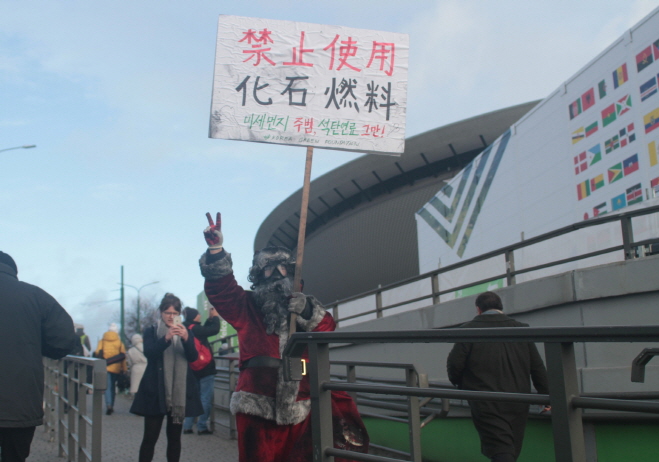 SEOUL, Dec. 12 (Korea Bizwire) – A ‘Black Santa’ appeared at the 24th Conference of the Parties to the UNFCCC held in Katowice, Poland on Tuesday.

As if he had just come out of a chimney, the Santa had black stains on his clothes, beard, and his face.

The Santa was actually Choi Yul, president of the Korea Green Foundation, who, together with Lee Jae-seok, a public-service advertisement expert, held a one-man protest to raise awareness about the seriousness of fine dust in South Korea.

The two protestors held up slogans written in Korean, Chinese and English calling for an end to coal-powered energy, which is known to be the primary cause of fine dust.

Fossil fuels including coal are known to be most responsible for fine dust in South Korea and China.

According to the World Health Organization (WHO), find dust kills approximately 7 million people worldwide each year.

“The reckless use of coal throughout South Korea and countries around the world is creating a serious global issue,” said Choi.

“There are no borders when it comes to environmental problems, and this issue requires joint action from many nations as well as environmental activists.”