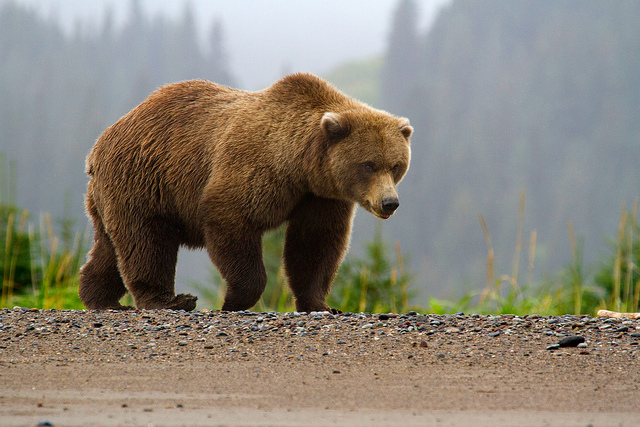 Even though there was a padlock on the iron-barred door between the cages, the bear easily broke it by knocking the badly rusted lock with its paws. (image: Lake Clark National Park & Preserve/flickr)

JINJU, Korea, Dec. 8 (Korea Bizwire) — In the Jinyang Lake Zoo run by the city government of Jinju, South Gyeongsang Province, there was an incident in which a male brown bear attacked an aged female lion. The lion died on the following day from injuries, but the zoo administrators reported it to the city authority as a death from natural causes.

According to the city government on December 7, the brown bear had raided into the lion cage on November 29. Even though there was a padlock on the iron-barred door between the cages, the bear easily broke it by knocking the badly rusted lock with its paws.

Nonetheless, the zookeepers said in their death report, “The lioness was unable to eat for a week and we had to sustain her life with IV solutions. We judged it to be from natural causes as there were no external wounds in autopsy and signs of internal bleeding in the large intestine and inflammation in the liver. But The Korea Joongang Daily reported based on a witness testimony, “The lion’s face and the whole body were covered with blood and the floor was soaked with blood.”

Established in 1986, the Jinyang Lake Zoo is almost 30 years old with so many places badly needing repair and major renovation. For example, the ape cages are so corroded that one can get red rust if he rubs his hand on the columns and iron bars of the cages. In many cases, animals occupy cages originally not designed for them.

According to the Joongang Daily report, the Jinju city government pays about 200 million won to the zoo for upkeep and labor cost of which about half goes to the animals’ feed and drugs. There is no separate payment for repair and maintenance of the animal cages.

Not just the Jinyang Lake Zoo, but all the zoos in Korea are quite poorly managed. Even though there is a law stipulating animal welfare and protection, this is applicable mostly to pets but not to zoo animals. Zoos are now treated as a facility like natural parks, museums and art galleries without any special law protecting the welfare of their inhabitants.

Last year, a YouTube video exposing an abuse of an elephant seal by a trainer at Jouju, a theme park in Goyang City in Gyeonggi Province, by kicking and beating the animal circulated on the Internet, causing uproar among animal lovers. The problem at the time was not blamed for one person’s recklessness but for general lack of money to protect animals. This is the same for the latest case in Jinju.

The capitalist low-cost, high-efficiency mantra is also applicable to all zoo management as well. In popular zoos, the animals must serve visitors from early hours to late afternoon while in zoos with few visitors the animals have to be at the mercy of wretched living conditions.

The 30,000-square-meter Jinyang Lake Zoo holds about 260 animals from 52 species including lions, tigers, brown bears, and camels in 20 cages.