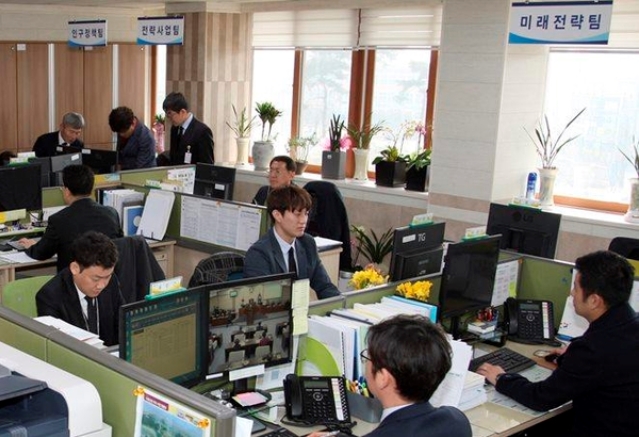 SANGJU, Feb. 22 (Korea Bizwire) – Government employees in Sangju, North Gyeongsang Province, came to work in black ties after receiving the news that the city’s population had shrunk to less than 100,000 people.

On February 8, the population of Sangju dipped below 100,000 people for the first time in recent history.

Following the news, city government asked all employees to wear black ties and black outfits on Thursday to focus on recovering the city population of 100,000 people.

Sangju city office explained that only 20 to 30 percent of all employees wore black, since the request was not mandatory.

“It wasn’t meant to be seen as mourning attire,” said a source from the city. “We gathered those who were dressed in black on that day only for the photo shoot.”

The city has been providing various benefits to attract new residents, offering 200,000 won (US$177) to all college students residing in the city every semester, as well as distributing packages of 20-liter trash bags.

However, an aging population and low birthrate is making it more difficult for Sangju to maintain its population.

In North Gyeongsang Province, Yeongju City, Yeongcheon City, and Chilgok County are the other three areas that barely reach 100,000 residents, and Sangju is the first city to go below 100,000.

If Sangju fails to return to the 100,000 residents within the next two years, structural change is inevitable among government employees at the city.

Major positions at the city will be demoted to a lower rank, and a number of bureaus will be shut down. “It is tragic news for all of us, but we will accept this as a chance for us to make a new start,” said a source from Sangju.