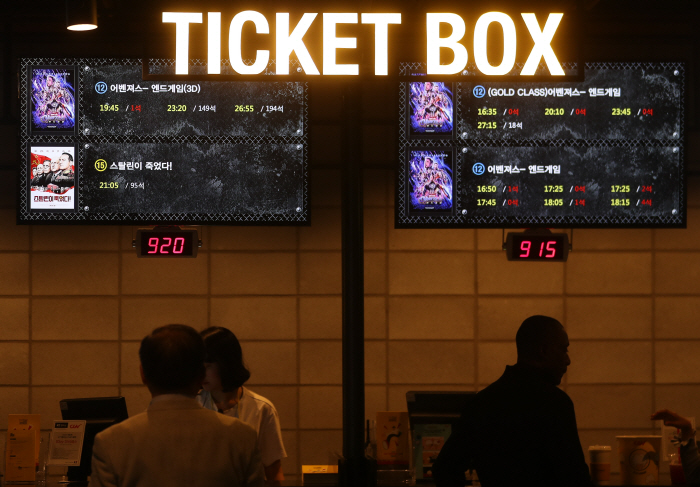 Reflecting the popularity of the movie, a number of unusual situations are popping up that have not been seen with other movies. (Yonhap)

SEOUL, May 2 (Korea Bizwire) — The global craze for “Avengers: End Game,” the fourth film in the Avengers series, has also hit South Korea.

There are also a variety of unusual scenes that are a testament to the movie’s popularity, with ‘spoiler alert signs’ and even a ‘black market for tickets’ appearing.

According to the Korean Film Council on Tuesday, “Avengers: End Game” is the top box office hit with 6,315,628 tickets sold as of April 28. The movie sold more than 6 million tickets just four days after its release on April 24.

Reflecting the popularity of the movie, a number of unusual situations are popping up that have not been seen with other movies.

One example is the ‘spoiler avoidance phenomenon.’ The general public is extremely wary of related videos and comments from other people since the release of the movie.

It’s common for latecomers to not want to hear the plot after the film’s release.

This time, however, there is even a phenomenon where people avoid restaurants and cafes near movie theaters or talk about “Avengers: End Game” at all as if it is a taboo.

In fact, online postings show how to avoid spoilers for movies, while several restaurants and cafes put up notices such as ‘restrain yourself from talking about Avengers during meals’ and ‘Please refrain from spoiling “Avengers: End Game” in the store.’

The Walt Disney Company Korea has even launched the ‘Avengers No Spoiler Campaign’ with the phrase ‘Thanos still demands your silence.’

As the popularity of movies has been on the rise, more and more people are trading related products or real tickets online.

Furthermore, there is a phenomenon of buying and re-selling tickets for each movie theater. It is known that the demand for tickets at a certain time and at a certain seat with a good view is high.

Some even said that they would buy tickets for a small extra charge.

They posted messages on second-hand trading websites that said, “We will buy the ticket for 8,300 won (US$7.10) per person.”

However, despite a huge craze over the movie, some people are uncomfortable with the movie’s popularity.

Many people say that most theaters are only screening “Avengers: End Game,” which undermines diversity in the movie industry as a whole.