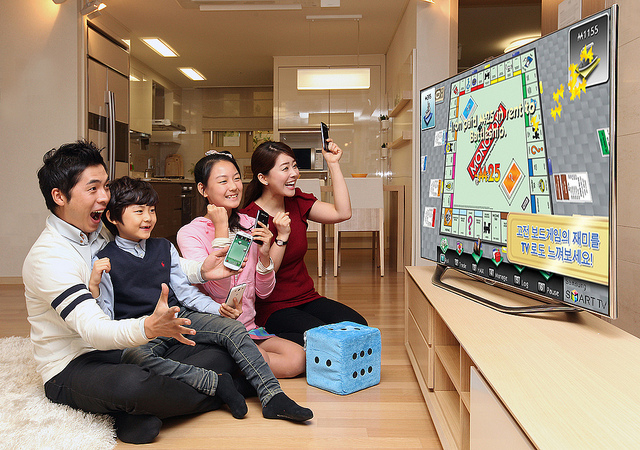 The combined market share held by the two came to 43.4 percent last year, with Samsung accounting for 28.2 percent and LG for 15.2 percent. (image: Samsung Electronics)

SEOUL, April 13 (Korea Bizwire) – South Korea took up nearly half of the global smart TV market in 2014, data showed Monday, with Samsung Electronics and LG Electronics being the only tech players to post a two-digit share.

The combined market share held by the two came to 43.4 percent last year, with Samsung accounting for 28.2 percent and LG for 15.2 percent, according to the data compiled by market tracker DisplaySearch.

Other global rivals were far behind the two South Korean players, with Japan’s Sony posting 7.6 percent, and China’s HiSense Electric and Sky worth Group accounting for 6.7 percent each.

Samsung has been posting top scores in other segments as well, with its share in the global flat TV market reaching an all-time high of 29.2 percent last year. LG followed with 16.7 percent, trailed by Sony with 7.9 percent and HiSense with 5.5 percent. TCL, another Chinese firm, held 4.6 percent.

DisplaySearch estimated the combined shipment of smart TVs will reach 97 million units this year, accounting for 41.2 percent of the combined sales of flat TVs.

Earlier this year, Samsung said it will tap deeper into the global smart TV market through an improved HD TV lineup that adopted a quantum-dot technology that can reproduce 64 times more accurate colors than existing liquid crystal displays. All of the models are powered by its own operating system: Tizen.

LG has also been promoting the Web OS 2.0 platform on its smart TVs. an updated version of the Web OS smart TV platform released last year. The company said the new system will deliver a more convenient user experience by boasting a faster speed.