Over 150,000 followers and likes, and more than 40 YouTube videos, one in particular on Cambodian street food boasting 1 million views and counting has turned the protagonist behind www.facebook.com/nearykorea into a Cambodian star. (Image: Kim Ryu-won)

SEOUL, Jan. 31 (Korea Bizwire) — Over 150,000 followers and likes, and more than 40 YouTube videos, one in particular on Cambodian street food boasting 1 million views and counting has turned the protagonist behind www.facebook.com/nearykorea into a Cambodian star.

All this was accomplished in just seven months by 26-year-old Kim Ryu-won, who first created her “nearykorea” Facebook account last June.

Kim first arrived in her adopted country as a short-term missionary before falling in love with Cambodia. After deciding to make her stay permanent in October 2013, Kim has busily soaked up the Southeast Asian nation’s culture and lifestyle, enough to feel confident to start putting her story and interests out into the public sphere.

Now in charge of running a design company, Kim said in an interview with Yonhap News on January 30, “I wanted to document my life here, living in a country that is extremely special to me. Because watching videos on smartphones is more popular than reading books here I thought of creating a Facebook page.”

She added, “I wanted to share useful information to people who lack the proper know-how on things like whether to apply sun screen at night or during the daytime or when they should use skincare products. I wanted to take on the challenge of becoming a content creator and showing the life of a foreigner who loves Cambodia.”

When asked to explain the secret behind her popularity, Kim answered, “I think what people like about me the most is a foreigner’s sincere love for their country. Among the responses I’ve gotten on my accounts, many of them are along the lines of ‘Thank you for showing love for our country’.”

From plotting out ideas to filming and editing, Kim nearly singlehandedly takes care of every aspect of the content she creates. 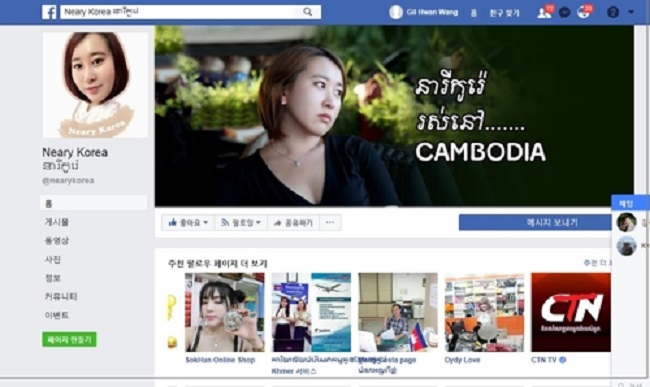 Some of the videos Kim has produced detail beauty tips, such as “massage techniques to make your face smaller”, “how to properly wash off makeup” and “how to make all-natural skincare face masks using tropical fruit”.

Kim’s star has risen to the point that Cambodian channel CBN Khmer TV regularly broadcasts the videos that are uploaded onto nearykorea’s Facebook page.

Though admitting she has been inundated by requests from TV shows and newspapers for interviews, Kim said that she has respectfully declined the invitations as she isn’t “trying to become a celebrity”.

“I want to keep making helpful content and become an influential content creator and beauty creator in Cambodia,” Kim said regarding her future.