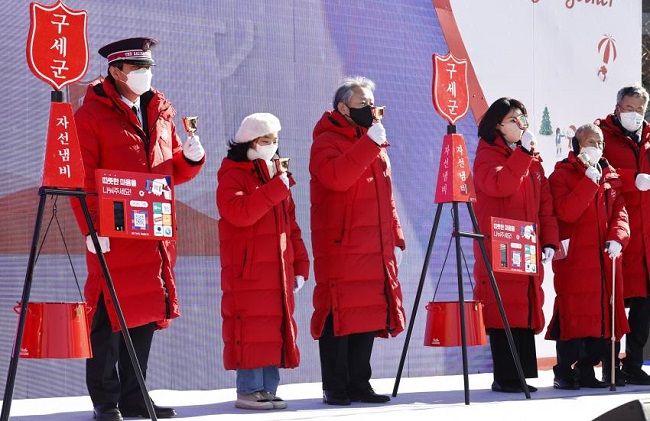 Participants ring bells at a plaza in front of Seoul City Hall on Dec. 1, 2021, during a ceremony to mark the start of the charity organization Salvation Army’s year-end donation campaign. (Yonhap)

SEOUL, Dec. 7 (Korea Bizwire) — Amid the public’s distrust of charitable organizations, blockchain technology that is safe from forgery and modification is emerging as a solution to address such suspicion.

The amount of donations collected at Cherry, a donation application released in December 2019 by startup E4NET Co., reached 2.6 billion won as of December 5, more than doubling since its inception.

Blockchain technology ensures real-time storage of the detailed statement of donations, including information on how donors made donations by bank transfer or credit card and how and for whom such donations were spent.

Any donor can check all of the information, thereby giving them confidence that their donation is not appropriated or misused for other purposes.

Existing large charity organizations are also actively embracing blockchain technology. For the year-end season, the Community Chest of Korea is staging a donation campaign through the metaverse platform Zepeto and receiving donations via the Cherry app.

E4NET plans to unveil a donation platform connecting card and blockchain technologies through a collaboration with credit card processing firm BC Card Co. and the Green Umbrella Child Fund by the end of this month.

According to a survey conducted in 2019 by the Korea Association of Fundraising Professionals of 1,052 men and women, more than 60 percent of respondents picked distrust against charitable organizations as the primary reason why they do not make donations.