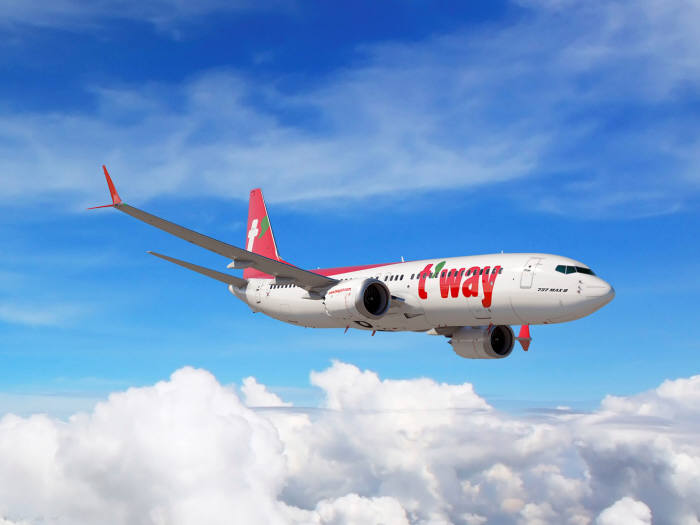 A computer generated image of a B737 Max 8 passenger jet in the livery of T’way Air. (Image: T’way Air)

At a press conference in Seoul, Boeing forecast the Korean civil aviation market to continue to grow this year after posting an average annual expansion of nine percent since 2012. It expects future growth will be driven by budget carriers as they expand medium-haul routes to Asian countries.

South Korea accounted for 15 percent of Boeing’s Asian fleet market last year, he said, with LCCs here benefiting from Incheon International Airport, a hub for passenger traffic in Northeast Asia that is close to China and many other Asian countries.

“We see strong demand for single-aisle aircraft because of low-cost carriers’ growth and we see a tremendous amount of widebody potential due to the hub status of the Incheon airport and the capability and growth that Korean Air Lines and Asiana Airlines have seen around long-haul routes,” Darren Hulst, marketing director in charge of Northeast Asian sales at Boeing, said.

Globally, low-cost carriers grew to account for 31 percent of the aviation market in 2017, more than tripling from 10 percent in 2002, the executive said.

The most popular single-aisle models are the Boeing 737-800, aircraft powered by CFM56-7B engines, and the Boeing 737 MAX 8, powered by Leap-1B engines. T’way Air Co. and Eastar Jet have recently added the B737-800 jet to their fleet.

As for widebody jets, Boeing said its bigger planes will lead the market as more fuel efficient, spacious and reliable models are set to be launched.

The aircraft manufacturer received 912 aircraft orders in 2017, with its order backlog reaching 5,864 planes at the end of last year.