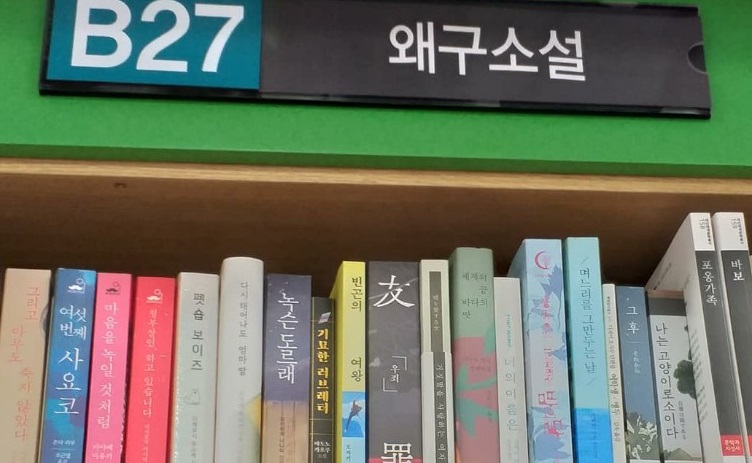 The nameplate ‘Waegu Novels’ at a bookstore in Daejeon. Waegu is a term used to refer to a group of Japanese in the past. (image: THE WORD NEWS)

DAEJEON, Oct. 22 (Korea Bizwire) — A South Korean bookstore in the central city of Daejeon stirred up an anti-Japan controversy by attaching the nameplate ‘Waegu Novels’ to the bookshelf for Japanese novels.

Waegu is a term used to refer to a group of Japanese pirates who plagued the seas of East Asia, especially between the 13th and 17th centuries. Some Koreans use the term as a way to look down on Japanese people.

In an interview with local media on Wednesday, the owner of the bookstore said that Japan’s economic retaliation against South Korea as well as the fact that a number of bookstores in Japan run ‘Anti-Korea’ corners in their Korea section made him angry.

He said that he attached the nameplate at the end of last year, adding, “A large number of bookstores in Japan have been running ‘Anti-Korea’ sections for a long time.”

He noted, “After Japan’s former Prime Minister Shinzo Abe launched an economic retaliation policy against South Korea, I made such a decision to express my anger and opinion.” At the bookstore, the bookshelf for Japanese novels, including those written by famous Japanese writers such as Haruki Murakami and Keigo Higashino, is located between the foreign novel section and the juvenile literature section.

This kind of nameplate, however, has the risk of arousing anti-Japan sentiment and drew mixed responses from social media and online users, with some saying that such behavior was excessive.