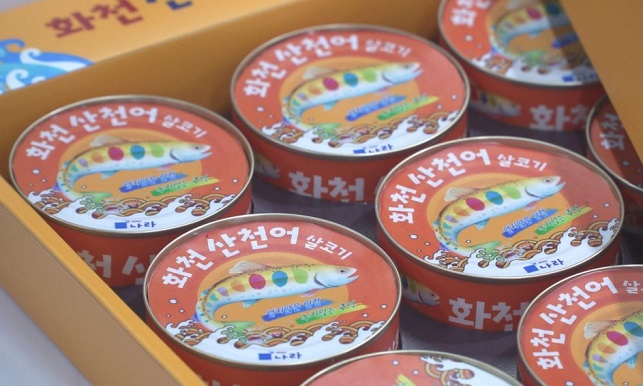 HWACHEON, Jan. 25 (Korea Bizwire) — Many local governments nationwide are struggling to cope with repercussions from the coronavirus-caused cancellations of their seasonal festivals that used to generate sizable economic benefits and tourism income for local residents and merchants.

The Hwacheon Sancheoneo Ice Festival, a world famous ice fishing event hosted every winter by Hwacheon, a Gangwon Province county near the inter-Korean border, is not an exception, as its 2021 edition was cancelled due to COVID-19.

The number of visitors to the fishing festival for “sancheoneo,” a species of trout known to live only in very clean fresh water, surpassed 1 million for the 13th consecutive year in 2019, though the attendance fell to 430,000 last year due to unseasonably warm weather.

Many local and foreign news organizations have introduced the magnificent scene of people trying to catch fish through holes in the vast frozen river in Hwacheon.

Approximately 20,000 fishing holes were pierced through the ice about the size of 24 soccer fields.

With this year’s festival cancelled due to the coronavirus pandemic, however, county officials and residents in Hwacheon, about 120 kilometers northeast of Seoul, are struggling to dispose of 77 tons of unused sancheoneo all supplied by local fish farms in the county.

The 77-ton inventory is estimated at 250,000 sancheoneo, with one ton usually comprising 3,000 to 4,000. The county had reduced this year’s volume to less than half of the previous years’ average of 180 tons due to coronavirus-related uncertainties. 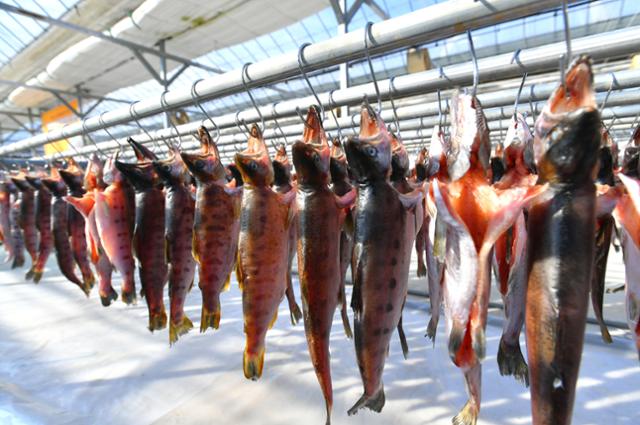 After much debate, the Hwacheon county and Foundation Corporation Nara, the organizer of the Hwacheon ice fishing festival, decided to turn 63 tons of the huge fish inventory into various food products.

The county has organized food tasting events featuring 20 kinds of various foods based on sancheoneo and plans to produce semi-dried and canned sancheoneo, including lean meat cans, for online and offline sales.

While it is important to capture the taste of consumers, county officials have also paid great attention to securing sufficient marketing channels.

It will produce 40 tons of canned sancheoneo and fish cakes in cooperation with major domestic food companies.

Civil servants and residents have worked together since Jan. 7 to turn fresh sancheoneo into semi-dried products inside greenhouses.

They will produce 7 tons of semi-dried sancheoneo and 3 tons of meal kit, while another 10 tons of the fish will be turned into soy sauce products during the first half after fermentation.

In particular, they will sell 5,000 gift sets comprising semi-dried and canned sancheoneo in time for the Lunar New Year’s holiday in early February. They said 2,000 of the gift sets will be sold through a TV home shopping program.

In addition, the Nara foundation will sell fresh sancheoneo to major hotels in Seoul, which will turn them into various dishes for their customers.