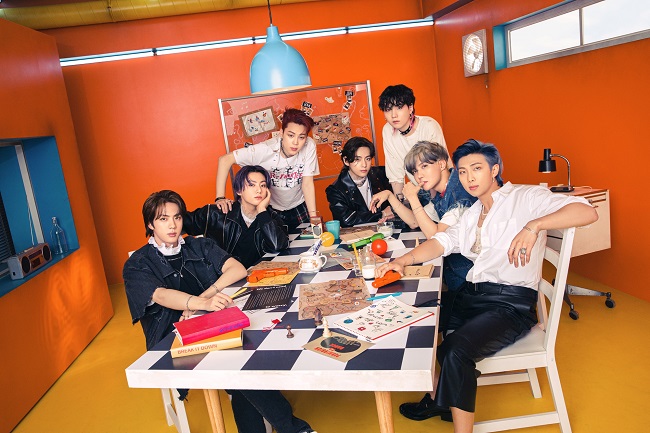 The summery song dropped one notch to No. 8 on the Hot 100 chart after earlier spending nine weeks at No. 1, Billboard said on its website Monday (U.S. time).

“Butter” had sat atop the main singles chart for nine nonconsecutive weeks, becoming the longest-running No. 1 song of 2021.

The seven-piece act also topped the chart with “Permission to Dance” for one week.

Since its release in late May, “Butter” has swept online music charts and streaming platforms across the world, including iTunes and Spotify.

The song set a record for the longest No. 1 streak achieved by a group since 1995, when “One Sweet Day” by American singer-songwriter Mariah Carey and R&B group Boyz II Men spent 16 weeks atop the Billboard Hot 100.

“Permission to Dance,” which was released July 9, is the group’s second collaboration with British singer-songwriter Ed Sheeran.

Coming in at No.’s 1-3 on this week’s Hot 100 chart were “Stay” by The Kid LAROI and Justin Bieber, followed by “Bad Habits” by Ed Sheeran and “good 4 u” by Olivia Rodrigo.

“Butter” racked up a total of more than 100 million plays to receive platinum certification from the Recording Industry Association of Japan in July.

The song set a record for the Japanese association for shortest period to reach platinum, at 72 days.