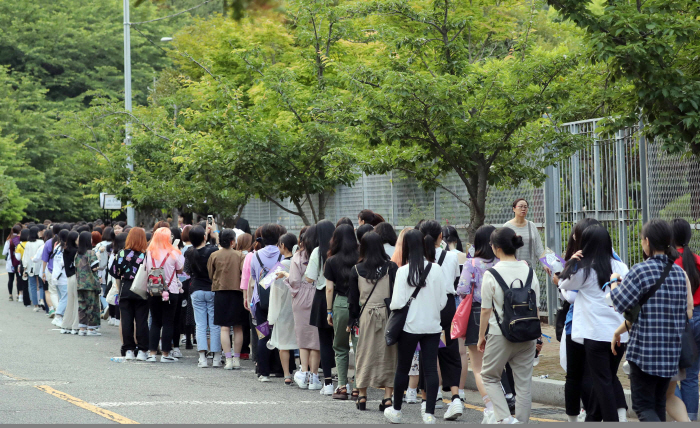 Fans line up for the first day of the Busan leg of the “5th Muster [Magic Shop]” tour at Busan Asiad Auxiliary Stadium on June 15, 2019. (Yonhap)

BUSAN, Jun. 17 (Korea Bizwire) — A group of BTS fans caused a commotion on Saturday after the production company in charge of the South Korean boy band’s first fan meeting concert in Busan denied entry to a number of fans.

The fan meeting took place at Busan’s Asiad Auxiliary Stadium, where more than 100 fans demanded entry to the event. Most of them were parents with children.

Parents who reserved the tickets for their children submitted family registration certificates to prove their family relationship, and asked the event host to allow their children to enter, which the host rejected.

“Getting tickets to a BTS concert is very difficult, so in many cases, parents make the reservations for their children,” said one parent.

“It is unacceptable that the children cannot get in even after we submitted all documentation to confirm our reservation as well as our family relationship.”

A number of foreign fans who showed up at the event were also turned away for similar reasons.

The event host reportedly allowed some fans to enter based on their own discretion, while turning away others.

“It was a necessary measure to prevent the distribution of illegal tickets. Only those that match with the name on the reservation list, with a proper certificate of identification, were allowed entry to the event,” said Big Hit Entertainment, the management company for BTS.