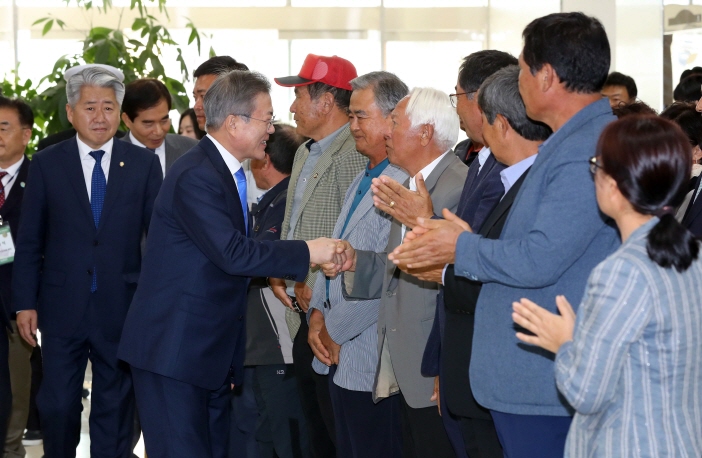 President Moon Jae-in, at the gathering with villagers, reportedly said that a naval base does not have to be a foothold for war. (image: Yonhap)

SEOUL, Oct. 12 (Korea Bizwire) — After President Moon Jae-in’s appearance at the Korea International Fleet Review taking place on Jeju Island, the president also took time to visit the nearby Gangjeong Village on the southern coast of the island, the subject of various controversies surrounding the construction of the Jeju Naval Base.

According to a spokesperson at the Blue House, the president told villagers that he hoped to talk to them about what the future could hold. “Let’s wash away the pain, conflict and divide of the past,” said Moon.

President Moon, at the gathering with villagers, also reportedly said that a naval base does not have to be a foothold for war.

“It could be a base for peace,” said Moon, citing Hawaii as an example as it has been able to prosper as a peaceful island despite being home to the world’s largest naval base.

“Panmunjom was a place where the two Koreas were in contention, but after the April summit meeting, it has become a sign of peace,” continued the president.

The president also mentioned the Jeju Uprising in 1948 and 1949 when the island was subjected to a communist insurgency, leaving thousands of people dead.

“The people of Jeju were able to turn the Jeju Uprising into a symbol of peace,” said Moon, who went onto say that the naval base was not targeting North Korea.

“The naval base’s role will be one of protecting our sea, ships and people,” said the president.

President Moon also talked about how the residents of Gangjeong could also live and work together with the navy base by looking to the example of Jinhae, a city that transformed itself by holding cherry blossom festivals to attract tourists despite the existence of a naval base in the city’s center.

The president also said that having cruise ships coming into the area’s port could help the village by creating tourist-friendly facilities nearby that would attract visitors to the village.

Lastly, Moon thanked the villagers for allowing the naval base to host the Fleet Review. “We can’t turn back the past. Let’s hold hands and head to the future together,” he concluded.