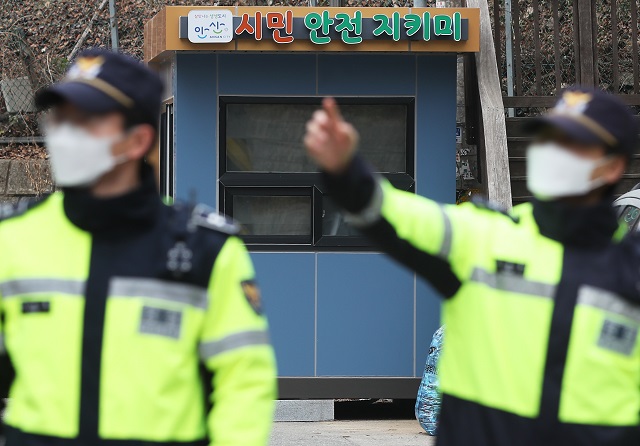 Police officers remain on duty on streets in front of a crime prevention guard post in Ansan, 42 kilometers southwest of Seoul, on Dec. 10, 2020. (Yonhap)

SEOUL, Sept. 14 (Korea Bizwire) — Police said Tuesday it will launch a ‘knock knock’ campaign to promote the silent emergency call system, which was designed to ensure fast initial responses and the protection of victims who are in a situation where they cannot speak about their circumstances.

In January, the National Police Agency introduced a new 112 emergency call system that allows callers to inform the operator of their situation without the need to speak, particularly in cases of domestic violence or dating violence when victims and offenders are in the same space.

Without having to speak, callers can push the number buttons on the phone following the guidance of 112 operators.

In such cases, operators send visible 112 links to callers, and if the links are clicked, detailed information about the caller, including their location and the circumstances they face, is sent to the regional comprehensive situation room.

Secret chatting between 112 operators and victims is also possible.

Thus far, the police have defined silent calls as ‘atypical calls’ and educated 112 operators to respond on the basis of manuals including response methods.

From now on, however, the police will formalize such types of calls as official emergency calls and improve the response speed and efficiency through a connection with the new system.