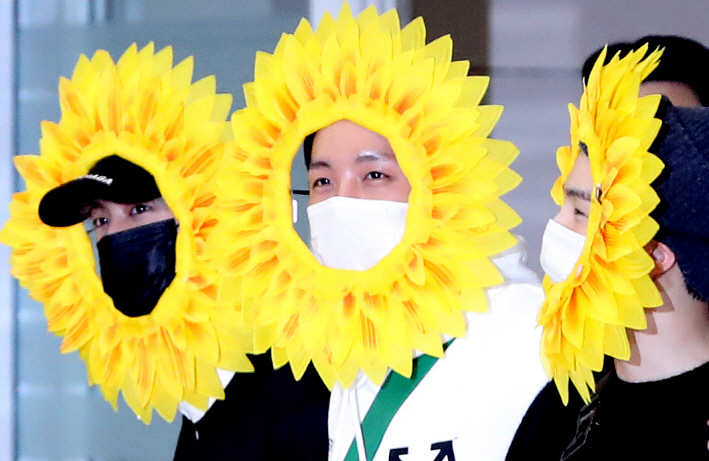 SEOUL, Jun. 20 (Korea Bizwire) — When BTS returned to a hero’s welcome at Incheon International Airport after finishing its monthlong tour of the Americas and Europe, scores of fans and journalists eagerly awaiting their arrival burst out laughing.

That’s because three members of the septet — Jin, Suga and J-Hope — appeared wearing flashy yellow sunflower accessories around their faces. Waving hands merrily, the four other members passed by the three with sly smiles.

Some fans were curious about the comical headgear. Some guessed that it might be a punishment for an episode of “Run BTS!” the group’s own online-based TV-like reality show.

It is not the first time that some BTS members have showed up at an airport with intriguing accessories like rabbit hats, strange costumes and T-shirts as punishment over the show’s episodes.

Starting in 2015, “Run BTS!” is the most popular content made by BTS aired on V Live, an online video footage and livestreaming platform run by Naver, South Korea’s biggest internet portal operator.

Many K-pop idol groups have taken the same strategy these days to expose their members to the public as much as possible through TV entertainment shows, dramas and films.

However, the difference is that BTS members rarely appear on television programs and films. They, instead, appear in their own internet-based content, on top of their constant efforts to better communicate with worldwide fans through social media.

“BTS got to the heart of the new digital media that has no borders and language barriers, considering the unprecedentedly loyal fandom of Army across the world, who spontaneously promote and publicize their idols,” said Lee Ji-young, a professor of philosophy at Sejong University, who is the author of “BTS, Art Revolution.”

“Now, (in the new digital era) quality content can be frequented by online users anywhere in the world,” she said. “Riding on the latest media trend, BTS has created outstanding content and become a global sensation.”

For new fans of BTS, “Run BTS!” is considered the most important tool to learn about the group, which was first known for their well-choreographed dances and aggressive hip-hop songs, to study.

In each episode aired every Tuesday, the boys are asked to complete challenges or do activities like playing arcade games and being chased by zombies, while they earn prizes or punishments in the end. 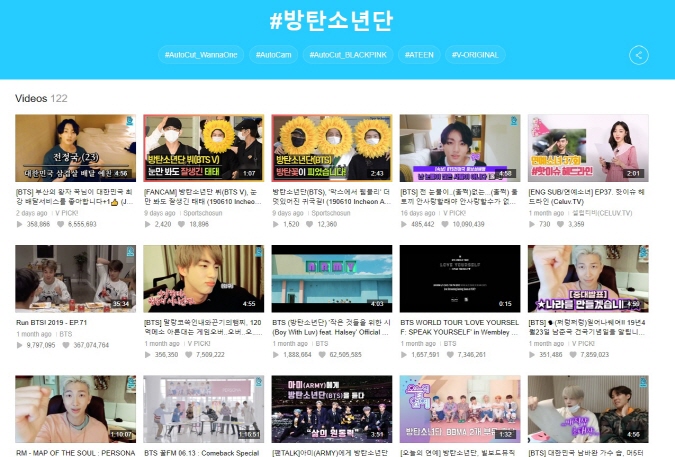 Such activities highlight each member’s temperament, playfulness and talent, as well as the group’s brotherhood and strong relationships that fans want to know the most about.

“Bon Voyage” is another BTS-made reality show about the boys traveling around the world every year, and “BTS Bomb” plays short behind-the-scenes videos at music shows and live stages.

Its official YouTube channel, Bangtan TV, posts a series of video clips of dance practices and radio programs, as well as the group relaxing.

Moreover, members don’t hesitate to post video logs to share the minutiae of their off-stage lives at hotels during world tours, and such streams attract millions of viewers around the globe.

“As a genuine fan of BTS, there are so many things to see,” said Lee Eun-jung, a big fan of BTS. “If I’m too busy to check the internet for a few days, I get lost and have to spend some sleepless nights to keep up with them.”

This content has contributed to building up authentic characters and stories of each of the seven members and made fans feel like the global superstars are boys next door.

For example, RM is a mature leader but a bit sloppy in his daily life, while Jin is a handsome older brother but enjoys not-so-funny puns.

Scenes and comments of the boys from “Run BTS!” “Bon Voyage” and other videos have been continuously recreated online by their fans with subtitles in various languages.

YouTube is full of these kinds of fan-created footage on mundane BTS moments — pulling pranks on each other, losing his passport while traveling overseas, eating meals and so on. Reaction videos of BTS shows are one of the most sought-after content on YouTube.

These recreated materials have played a role in attracting new BTS fans in the United States, Europe, South America and Asia.

Experts say such online shows have not only offered the funny, laughable characters of BTS but also acted as a tool to convey the ideas of the boy band’s musical world to their fans in an easy-to-access way.

Also, their off-stage stories and characters created through online videos and shows make the singers more appealing to fans.

“We can look at BTS members’ messages that they want to say in music through their words and attitudes shown in these online content,” Lee Ji-young said. “Therefore, the content made by BTS and their fans play a role in strengthening the authenticity of their music and messages.”