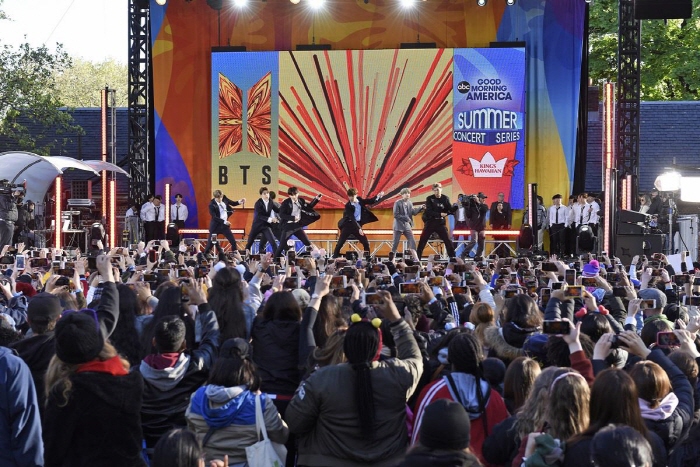 This image of BTS performing for the 2019 GMA Summer Concert Series in Central Park, New York, was provided by Walt Disney Television/Paula Lobo.

BTS was the first performer for the 2019 GMA Summer Concert Series, which will run from May 15 to Aug. 30 and feature a high-profile pop act every week, including Ellie Goulding, whose show is set for June 14, the band’s management agency Big Hit Entertainment said.

The Korean septet staged two of their hit songs — “Boy With Luv” and “Fire” — during the Wednesday concert, electrifying some 5,000 fans there. Tickets for the outdoor show sold out as soon as they went on sale.

As the concert’s host compared BTS to the Beatles, the Korean band members called themselves fans of the iconic British band and said they were honored.

BTS also labeled their latest single “Boy With Luv” as a fan letter to their fandom named “ARMY” and attributed their global success to their fans.

Since early morning on Wednesday, Central Park has been busy with BTS fans who camped out at the park in the run-up to the show.

The band is also scheduled to appear on CBS’ “The Late Show with Stephen Colbert” late Wednesday (U.S. time).

On May 4, BTS kicked off the U.S. leg of their ongoing world tour “Love Yourself: Speak Yourself” at the outdoor Rose Bowl athletic stadium in Pasadena, California.

On Saturday and Sunday, the septet will perform at MetLife Stadium in New Jersey.