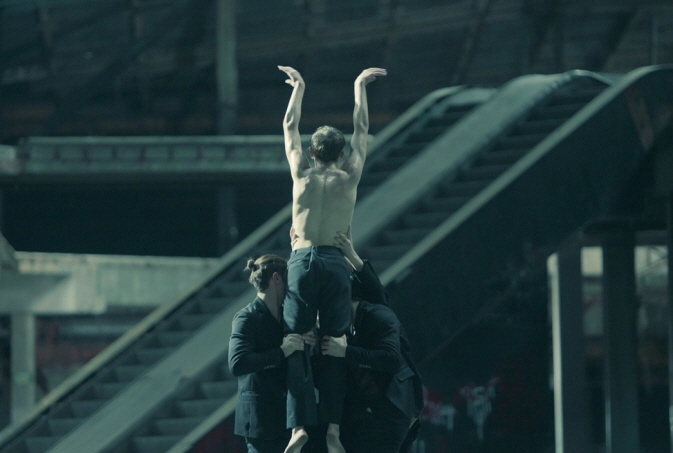 But instead of getting advance SNS hints and teasers about the band’s newest song, fans of BTS were completely left in the dark until the very moment of the official release of “Black Swan” last Friday.

“Black Swan” is the first BTS single pre-released from its upcoming full-length album, “Map of the Soul: 7,” scheduled for full release on Feb. 21.

The next day, the song topped iTunes’ Top Song charts in 93 countries and regions including the United States, Canada, Russia and India, proving the band’s global fame as well as the power of the new marketing gimmick.

As BTS grew into a global sensation and made a splash in the world music scene, so did the band’s playbook for marketing its music.

“Map of the Soul: 7″ is a major step forward in the development of the music marketing of BTS as well as the broader K-pop genre.

The SNS-centered marketing playbook of the K-pop genre has in fact drawn the attention of today’s global music world as much as the K-pop music itself.

Most K-pop artists drum up their music releases with teaser images and videos that sample the upcoming music from two weeks before the official music release.

The music itself comes, almost without exception, with an elaborately created YouTube music video, amplifying the acoustic as well as the visual allure of the song. 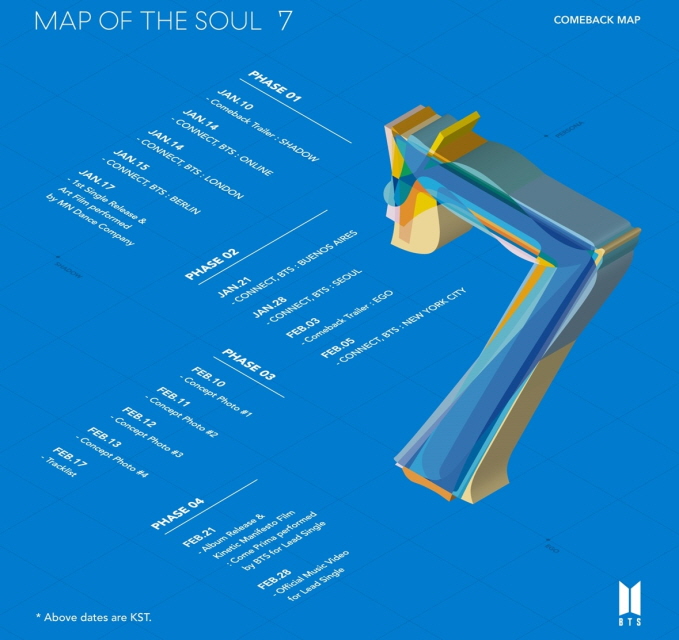 This image provided by Big Hit Entertainment shows the “comeback map” for BTS’ upcoming album, “Map of the Soul: 7,” scheduled for release on Feb. 21.

Some K-pop bands and artists then follow up with more YouTube videos focusing on the choreographic part of their music, keeping fans glued to the stars’ SNS flows.

Taking such typical marketing strategies one step further, BTS mapped out a tightly organized “comeback map” for the new album, a sophisticated three-stage timetable leading up to the Feb. 21 release of “7.”

In accordance with the pre-announced timeline released through the official BTS website and other online channels, BTS dropped the upcoming album’s first trailer, “Shadow,” and its music video on Jan. 10, officially launching the journey to release the much-anticipated second “Map of the Soul” album, which comes after the band’s historic three No. 1s on the Billboard 200.

The second trailer, “Eco,” is scheduled for release on Feb. 3 before the band drops concept photos for the new album every day from Feb. 10-13.

On Feb. 17, the full track list of the new album will become available, four days before the release of the full album and an accompanying “kinetic manifesto film” on Feb. 21.

The band will then disclose the music video of the album’s lead single a week after.

The seven-week album release plan is also peppered with a package of contemporary art exhibition projects, called “CONNECT, BTS,” involving five global cities like London, Seoul and New York City, the band’s first project to combine their music with media and performing arts as well as other art forms.

The new marketing experiment by BTS will likely help build up the marketing playbook shared by K-pop artists and their music distributors as K-pop is enjoying the best time of its global ascent.

Jeff Benjamin, an American pop columnist specializing in K-pop and a contributing writer for Billboard and Rolling Stone, said such digital marketing tactics are what set K-pop apart from other music genres in today’s global music scene.

“It is a music scene that is great for 2020. Today is a very digital age. K-pop makes sure to make a moment out of everything, whether it’s the release schedule, that usually comes in about two weeks of teasers, then the album and the music video, the title track and the singes that all come about at once,” Benjamin said during a press meeting last week in Seoul.

“It keeps people’s attention. Then people want to support them and they get more excited about it. It’s very much good when so many things are vying for our attention these days,” he said, citing the digital marketing as a key strength of K-pop.

“Having something like K-pop which moves very quickly and which is digitally focused is very good for especially how distracted young people are these days,” he said, adding that “the way (K-pop) is released and produced is very important for how it’s consumed globally.”