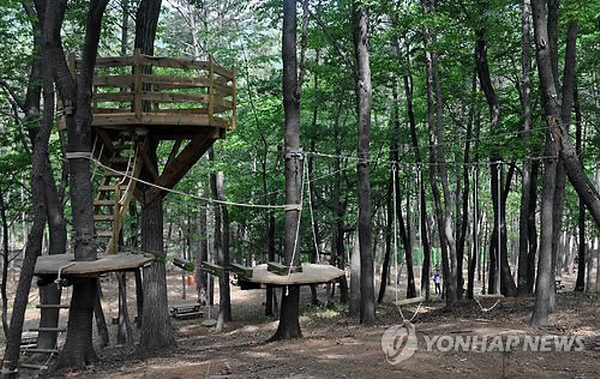 Environmental organization said that there were distinctive signs at the site indicating that the zoo had cut down trees illegally to establish the facility. (image: Yonhap)

BUSAN, Apr. 16 (Korea Bizwire) — Samjung The Park, Busan‘s only zoo, is under suspicion of conducting illegal logging at a dense forest site, and building an unauthorized children’s playground.

As the Busan Metropolitan City government and the Busanjin-gu Office said that they had yet to find evidence of any illegal activity at the zoo, even after conducting a multitude of site inspections, concern is rising over possible corruption between the zoo and local authorities.

On April 15, Yonhap News reporters and the Busan Foundation for Environmental Movement personnel visited the playground, called ‘Forest Challenge,’ and confirmed that the site is off-limits to any construction by law, as it is densely surrounded by trees more than 30-meters tall.

Furthermore, personnel from the environmental organization said that there were distinctive signs at the site indicating that the zoo had cut down trees illegally to establish the facility. Busan city officials and the Busanjin-gu office conducted several inspections at the site after receiving claims that the zoo was conducting illegal logging, but eventually a construction license was granted to the zoo.

Authorities are currently claiming that they hadn’t found anything unusual at the time. The environmental organization is planning to file official reports concerning the matter with prosecution bodies.