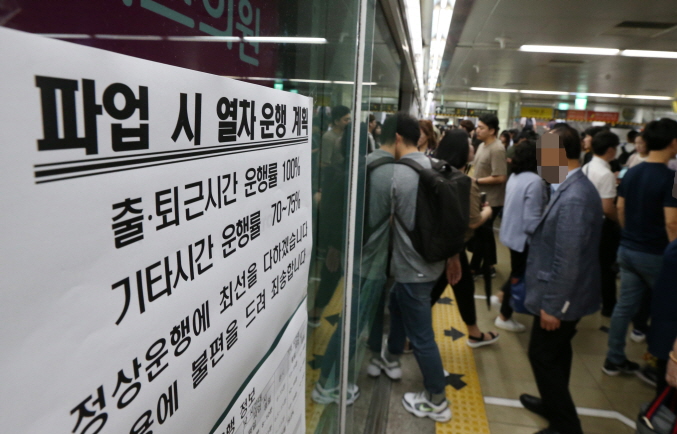 A subway station in Busan is busy with commuters on July 10, 2019, after unionized subway workers launched an indefinite strike over a pay dispute. (Yonhap)

The walkout by Busan Metro’s labor union began at 5 a.m. after its last-minute wage hike negotiations with management fell through the previous night.

The union said about 2,400 of its 3,402 members, including train drivers, station employees and technicians, were taking part in the strike.

According to the law governing public service corporations, Busan Metro is required to keep at least 1,010 “essential” employees on duty even in times of a union strike.

The labor union had initially demanded a 4.3 percent wage increase, lowering its request to 1.8 percent in the final negotiations held Tuesday night, whereas the management has refused to budge from a wage freeze.

They also differed on the extent of new employee hires.

It is the first subway strike in two years and 10 months in the southern metropolitan city. Busan Metro’s union staged strikes for 22 days on three occasions between September and December of 2016.

The union said the train operation rate is expected to drop to 61.7 percent of usual levels.

Busan Metro said it will mobilize all available personnel from the outside to operate subway services normally during the rush hours and maintain an operation rate above 70 percent at other times.