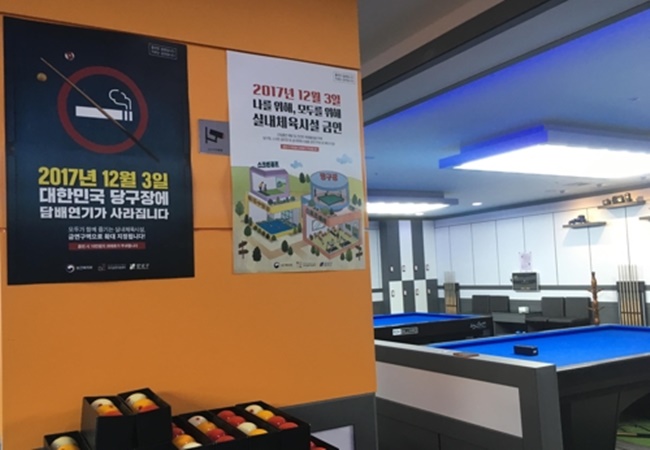 SEOUL, Dec. 5 (Korea Bizwire) – The smoking ban in pool halls across South Korea that took effect on Sunday is drawing mixed reviews, with some business owners expressing concern over the negative economic impact of the new policy.

Under the new amendment to the National Health Promotion Act, a smoking ban in public spaces now extends to indoor sport facilities including pool halls and screen golf cafes.

With the Ministry of Health and Welfare poised to introduce fines of up to 100,000 won for smokers and those of up to 5 million won for pool hall owners who fail to install no-smoking signs after a probationary period of three months, public opinion is being divided between supporters and opponents.

One internet user left a comment on Naver in support of the smoking ban, saying, “Though I’m a heavy smoker myself who smokes a carton every day, I think this is the right decision. I can’t cause inconvenience to others.”

“I’m very happy that the (smoking) ban has taken place despite being long overdue as pool is a sport like any other,” said another user praising the ban.

However, not everyone was happy, with some expressing concern.

One online poster, who claims to own a pool hall, said the smoking ban has negative economic consequences for pool hall owners.

“Though I’m a non-smoker, many customers have visited and left after playing only three to four games. In this tough economy, it feels like adding insult to injury,” the user said.

Jung, a 66-year-old pool hall owner, says he will still provide ash trays for patrons during the three-month probationary period, but agrees with the new smoking ban.

“Though I am a smoker myself, it is rather strange that smoking has been allowed in pool halls all these years despite pool being part of the national Sports Festival. Since not many customers are smokers, I don’t think it will impact my business much,” Jung said.

Another pool hall owner referred to only as Kwon paints a different picture, as he fears losing customers for whom pool is deeply associated with smoking.

“It’s true that we fear losing customers after the smoking ban, as many pool players expect to smoke while playing. However, thanks to the media coverage, some customers first double check with us whether the ban has taken effect already,” Kwon said.