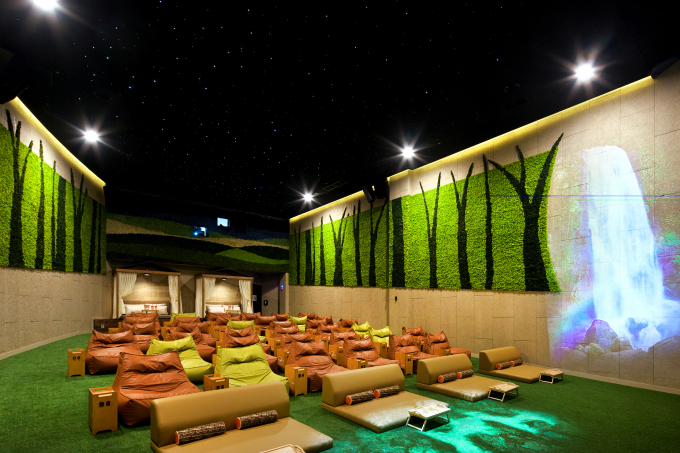 The cinema that sparked great interest among the public is “Cine and Foret,” a new movie theater that opened at CGV’s existing Gangbyeon branch.

CJ CGV, the largest multiplex cinema chain in South Korea, held a press event yesterday at its “Cine and Foret” hall modelled after a “nature” concept.

Visitors to the special theater say that the air is very different inside the cinema. Oxygen concentrators and scent machines installed throughout the hall create an illusion that people are actually inside a forest.

Meanwhile, the hall’s walls are decked with Scandia Moss, replicating the type of moss that reindeer in Scandinavian countries like to treat themselves to.

The moss, coated with minerals following a technology created by a local firm, is said to help filter the air, providing a more pleasant environment for moviegoers.

The seating arrangement is also very different from typical movie theaters. In lieu of tiered seats most common in conventional movie theaters, the seats at “Cine and Foret” are set on artificial turf on a gradual slope.

This allows movie watchers to be in a reclining position on bean bags that are provided as seating, giving one the impression of watching the movie while lying on grass.

Movie fans can also enter the theater 20 minutes before the movie starts and order a chicken and beer set or apples from Cheongsong County instead of the usual popcorn and soft drinks.