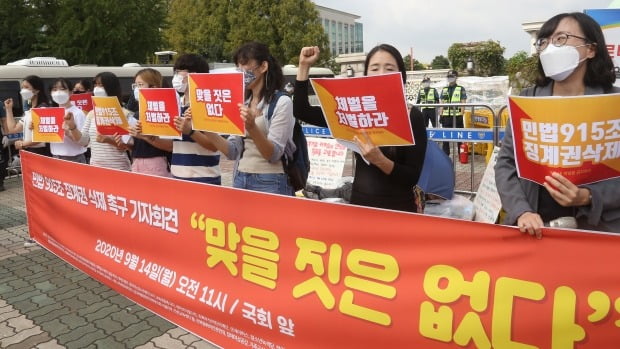 This file photo taken on Sept. 14, 2020, shows civic activists holding a rally in front of the National Assembly in Seoul to demand the revision of the Civil Law to ban corporal punishment of children. (Yonhap)

SEOUL, Oct. 13 (Korea Bizwire) — A revision of the Civil Law banning corporal punishment of children in principle passed through the Cabinet meeting on Tuesday, the Ministry of Justice said.

The ministry said the legal revision, which would eliminate a provision on parents’ rights to punish their children, was approved by the Cabinet meeting and will be submitted to the National Assembly on Friday.

Article 915 of the current Civil Law allows parents to take “necessary” disciplinary action against their children to teach or protect them. The provision was frequently misinterpreted as legal grounds for parents to physically punish their children.

The same article also allows parents to entrust their children to a reformatory or correctional institution upon the approval of the court, but the content was also dropped from the revision of the Civil Law, the ministry said.

The ministry said the legal revision is expected to help improve social awareness about child abuse.

The government’s push to revise the civil code came after criminal cases of child abuse, which in some cases resulted in deaths, have continued to occur nationwide.

In April, a group of legal experts advised the ministry to amend the controversial provision of the Civil Law.

Following the Cabinet approval, Justice Minister Choo Mi-ae said that child abuse and violence against children should from now be regarded as a crime, not as education, for any reason.

“Basically, sensitivity to human rights cannot grow without holding a respectful attitude toward life. Human rights can take root in society only when younger and weaker people are more closely embraced,” Choo said in a social media post.