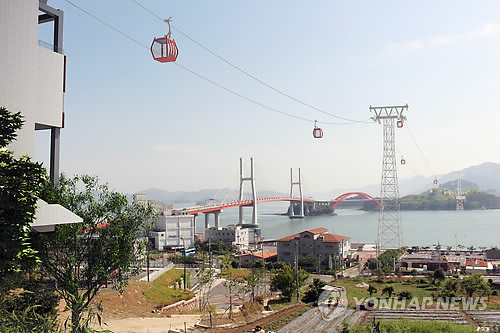 These local governing bodies are convinced that their plans will surely lead to success, as they have benchmarked Tongyeong Cable Car. (image: Yonhap)

SEOUL, May 9 (Korea Bizwire) – As a surprising number of local governing bodies around Korea are currently developing or planning cable car installations in their district to boost tourism, hoping to follow in the footsteps of a successful project in Tongyeong, several environmental organizations are opposing the idea, saying that the attractions are not without their drawbacks.

The Yangyang County Office has filed a request to the Ministry of Environment to authorize a plan to develop a gondola cable car which will travel 3.5㎞ at Seorak Mountain. The plan has already been denied by the ministry twice.

The City of Samcheok is currently drawing up plans for an 880 meter-long ocean cable car, and Sokcho is planning a 1,988 meter-long gondola cable car. Two counties, Jeongseon and Hwacheon, are also readying to develop cable cars at Mindung Mountain and Baegam Mountain respectively in Gangwon Province. Chuncheon, Gangneung and Inje County are also considering the development of cable car facilities.

Although these local governing bodies are convinced that their plans will surely lead to success, as they have benchmarked Tongyeong Cable Car, a hot tourist attraction, some environmental organizations are offering dissenting opinions.

Several organizations, including Green Korea, expressed worries that only two or three cable car operations are either profitable or close to breaking even among the 22 operating in Korea. As cable car infrastructure damages forests and seas, the organizations are calling for a stop to the frenzied development.