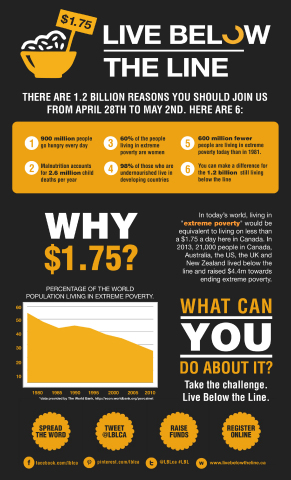 The Live Below the Line campaign encourages Canadians to eat and drink on $1.75 a day for five days while raising awareness and funds to eradicate extreme poverty (image: Live Below The Line/ BusinessWire)

TORONTO, April 7, 2014 (Korea Bizwire)–The second Canadian Live Below the Line campaign, presented by the  Micronutrient Initiative, kicks off in three weeks. From April 28 to May  2, 2014, participants will spend only $1.75 per day on all food and  drink, the Canadian equivalent of the extreme poverty line. In addition  to raising awareness and sparking a national dialogue to change the way  Canadians think about extreme poverty, the challenge will raise funds  for eight Canadian partner organizations that work to end extreme  poverty including Opportunity  International, Raising  the Village and Ve’ahavta.

From coast to coast, hundreds of Canadians have already joined the  challenge with their classmates, colleagues and families. Participants  are encouraged to sign up in groups to support one another, pool  resources and conduct group grocery shopping trips.

“Spending only $1.75 per day on food and drink is a difficult challenge  but one that has a huge impact,” says Odette Hutchings, Canadian  Campaign Manager, Live Below the Line. “It’s about providing a glimpse  into the difficult choices approximately 1.2 billion people must make on  a daily basis just to survive, and supporting Canadian organizations  directly combating extreme poverty. We’re calling all Canadians to join  us in the challenge, sign up, donate and support – together we can make  a huge difference!”

Several celebrities have stepped up to support the Live Below the Line  initiative – actress Bridget Moynahan, actor Ennis Esmer, and actress  Naomi Snieckus, have all signed on to take the five-day challenge.

“My family is taking the Live Below Line challenge again so we can raise  more funds to help end extreme poverty and remind ourselves how  incredibly fortunate we are,” says past Live Below the Line participant  Lee Hayes. “Pooling our money and feeding a family of five on just under  $45 was extremely difficult but also illuminating – it sparked a lot of  conversation around the dinner table that I know spilled into our kids’  school and our workplaces. It was an experience none of us will ever  forget.”

Source: Live Below the Line, the Global Poverty Project & the Micronutrient Initiative (via BusinessWire)