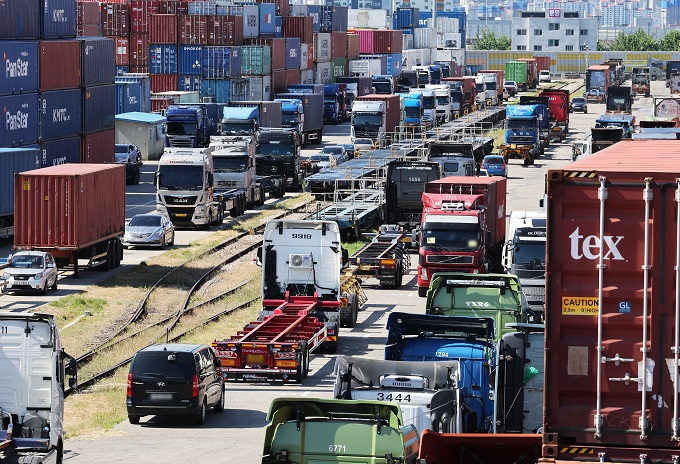 Trucks are parked at the Inland Container Depot, a logistics hub, in Uiwang, south of Seoul, on June 8, 2022, one day after unionized truckers of the militant Korean Confederation of Trade Unions went on an indefinite strike nationwide, demanding the extension of a basic freight rate system guaranteeing their basic wages. (Yonhap)

SEOUL, June 10 (Korea Bizwire) — As new cars are experiencing shipping delays due to semiconductor shortages, there are concerns that the recent cargo truckers’ strike will exacerbate the delay.

Industry sources said that the chip shortage has left South Korean consumers with wait times of at least one year for new Korean-made vehicles.

Buyers of Hyundai Moto Co.’s Avante compact sedan and Santa Fe SUV currently have to wait 10 and eight months, respectively, for delivery, while there is a 12-month wait for the Genesis GV80 SUV.

For Kia Corp.’s Sportage and Sorento SUVs, there are waits of 11 and 13 months, respectively, while buyers of the K5 sedan have to wait seven months.

The shipping delays are largely caused by limited production led by the shortage of semiconductors.

What’s more, the recent cargo truckers’ strike is threatening the supply of parts, which is expected to delay shipments even further, industry sources said.

The Cargo Truckers Solidarity, under the wing of the Korean Confederation of Trade Unions, has instructed members to reject the transport of automobile parts.

In response, the Korea Automotive Industry Alliance vowed legal action, arguing that the union has taken the automobile industry hostage for the sake of their own needs.

“The strike is an illegal action that sabotages shipments,” said Jung Man-ki, chairman of the Korea Automobile Manufacturers Association. “Without the proper supply of parts and shipment, a production crisis in the car industry is inevitable.”