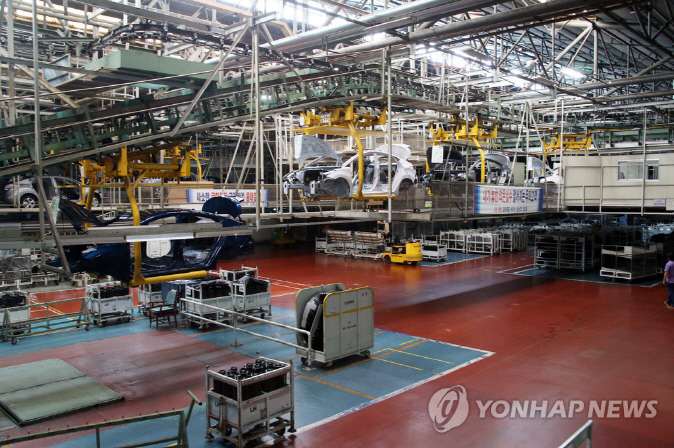 In one of the latest developments, Renault Samsung Motors Corp., despite being the least reliant on Chinese auto parts among the five automakers, said it is considering suspending its sole plant in Busan, 450 kilometers southeast of Seoul, for several days next week, due to a lack of parts.

“We receive some components from our Renault alliance partners (like Nissan Motor) but we may suffer parts shortages next week if parts plants in China do not resume operations on Monday following an extended Lunar New Year break,” a Renault Samsung spokesperson said.

The Chinese authorities called on manufacturers to stop operations until Feb. 9, a week after the end of the Lunar New Year’s Day holiday, to keep the potentially deadly virus from spreading further.

Hyundai, the country’s biggest carmaker by sales, said it will gradually suspend assembly lines at its seven domestic plants by Friday due to shortages of parts produced by South Korean firms in China.

It is the first time Hyundai has temporarily halted all of its domestic production lines since 1997, when the Asian financial crisis affected local manufacturers and Mando Corp. stopped supplying parts to the carmaker.

Early this week, Kia, which is 34 percent owned by Hyundai, started reducing output at two of its three domestic plants in Hwaseong and Gwangju.

“If auto parts factories in China resume operations on Feb. 10 or 11, production losses from lack of parts will be limited,” a Hyundai official said, adding there will likely be heavy output losses from an extended suspension.

If Hyundai’s plants remain suspended for five days, it will suffer a production loss of 30,000 vehicles worth between 600 billion won and 700 billion won, the company estimated.

Kia has eight domestic plants — two in Gwangmyeong, three in Hwaseong and three in Gwangju — and seven overseas ones — three in China and one each in the U.S., Slovakia, Mexico and India. Their overall capacity is at 3.84 million units.

To minimize any impact from parts shortages, the two carmakers said they are in talks with local auto parts companies that have production facilities at home and abroad for the supply of necessary parts.

“In case of a prolonged shortage of parts from China, we will ask local parts makers to fully operate their domestic plants and buy more components from their plants in Southeast Asia,” the official said. The entrance of SsangYong Motor Co. in Pyeongtaek, 70 km south of Seoul, on Feb. 4, 2020. The carmaker stopped the operations of its sole car assembly plant in the city on the day due to the exhaustion of parts from China amid the coronavirus crisis. (Yonhap)

The fallout from the virus could deal a further blow to Hyundai and Kia, which have been struggling with declining sales in China, the world’s biggest automobile market, in the past three years.

In 2017, the carmakers’ sales were weak there due to the lingering impact of political tensions between Seoul and Beijing over the deployment of an advanced U.S. missile defense system, THAAD, in South Korea.

In April 2019, Hyundai shut down one of its five plants in China, and in May, Kia suspended one of its three plants there due to lower demand.

If the suspension period ends within a week, industry sources expect carmakers will be able to fill the output gap through overtime work.

“But given China accounts for 30 percent of the country’s total auto parts imports in terms of value, a prolonged output suspension at carmakers would deal a serious blow to their bottom line this year,” Samsung Securities Co. analyst lm Eun-young said over the phone.

Indeed, it is a matter that concerns global manufacturers with production facilities in China, the analyst said, adding that it remains to be seen whether the Chinese government will extend the suspension order or not to this weekend, she said.

Since its emergence in the Chinese city of Wuhan late last year, the new coronavirus has killed at least 490 people and infected over 20,000 in China as of Tuesday, with confirmed cases in at least 24 other countries, including the United States.

South Korea has reported 18 confirmed coronavirus cases as of Wednesday.

GM Korea Co. and SsangYong Motor Co. are also being affected by the parts shortages.

On Tuesday, SsangYong Motor stopped the operation of its sole car assembly plant in Pyeongtaek, 70 km south of Seoul, and will maintain the suspension until Feb. 12 due to the supply crunch.

SsangYong said it will decide whether to extend the period depending on supply conditions in China.

GM Korea said it is closely monitoring the situation involving the novel coronavirus to minimize the impact on production.