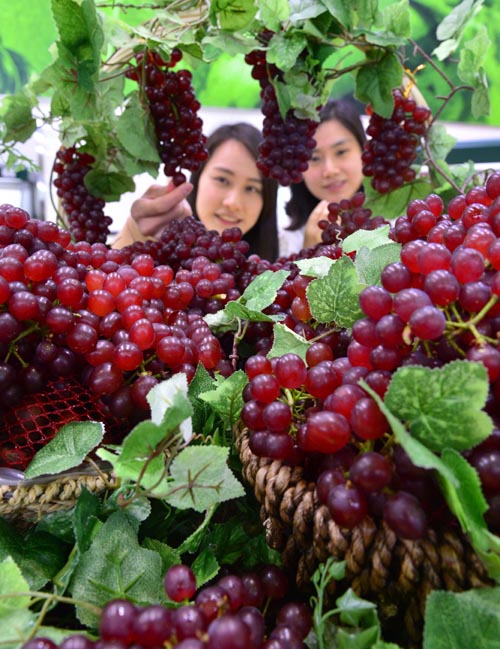 The locally produced Delaware grapes are to be available for the first time in Korea. (image: Yonhap)

SEOUL, April 18 (Korea Bizwire) – The economic impact on certain farmers of locally raised fresh fruits has proven to be relatively high compared to others, based on price declines following the South Korea-U.S. Free Trade Agreement.

Carrots, grapes and blueberries have been designated for support from government subsidies, according to the Ministry of Agriculture, Food and Rural Affairs on April 17.

The ministry announced the three crops have met the requirements to receive compensation from the government. As a result of the FTA between the two countries, some fruit imports have soared due to price competitiveness, pushing prices of locally-grown fruit in the same category down significantly.

The government is supposed to make up for any loss — 90 percent of the price decline — when local produces’ prices drop below 90 percent of pre-FTA figures.

Local blueberry and grape farmers also are eligible for government aid money destined for companies facing bankruptcy. This financial support is available to those who would not be able to recover their initial investment when shutting down their farming operations, and are unlikely to be profitable in the near future, although they must have engaged in the business for more than two years.

Meanwhile, imports of American farming and livestock products, including fruits, have increased significantly since the FTA went into effect in 2012. According to a report from the Korea Rural Economic Institute,  the total value of Korea’s imports of American agricultural products soared 17.7% last year to US$7.01 billion from a pre-FTA average of US$5.96 billion.