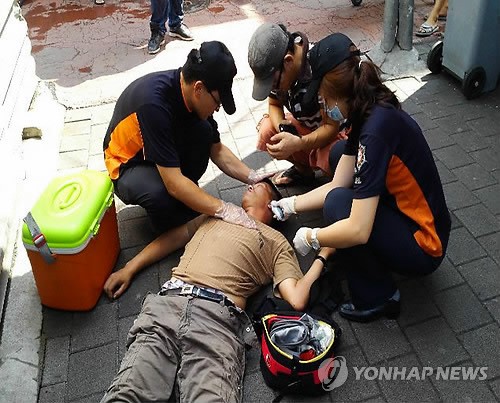 SEOUL, Aug. 2 (Korea Bizwire) — The number of cases in which rescuers drove ambulances to take people hit by a heat wave across South Korea to hospitals tripled from a year earlier to 1,066 in July, government data showed Thursday.

The data from the National Fire Agency also revealed the agency’s rescuers were dispatched to deal with drowning accidents 226 times in the month, up from 106 times in the same month last year.

During the month, there were 883 cases of rescuers supplying water to areas stricken with drought, a seven-fold growth from a year earlier.

Increased activities of bees brought on by the heat wave also caused rescuers to be called out to hornet nests 35,757 times, about 3 percent more than July last year.

A total of 2,266 people suffered heatstrokes or heat exhaustion in the first seven months of the year, 28 of whom died, according to data from the Ministry of the Interior and Safety.