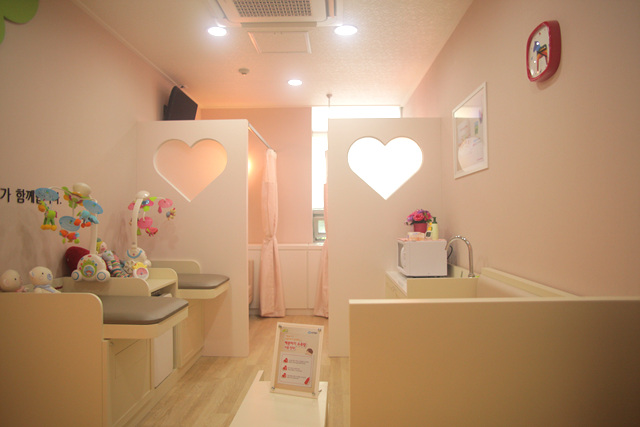 SEOUL, Korea, Dec 19 (Korea Bizwire) – Double Heart, the baby goods brand of Yuhan-Kimberly, has opened a nursing mothers room within the visitors’ center in Seoul Forest. Given the public park is largest in Seoul with more than 7 million visitors a year, the new nursing room within the premises will be a welcome change for moms with small babies who were reluctant to come out for a walk because of the need for frequent feeding.

According to a 2012 survey by the Ministry of Health and Welfare, the percentage of Korean mothers relying on breastfeeding is 32 percent, much lower than those for America (52%) and Japan (45%). The ministry attributed this at least partly to lack of feeding rooms in public spaces and workplaces.

The newly opened feeding room is equipped with diaper changing stations, with wet tissues, baby lotions, and nursing pads, with comforting lighting and background music. Located on the lobby floor of the park’s visitor center, the nursing room is open between 10 am and 6 pm.

A Yuhan-Kimberly official said, “Breastfeeding is proven superior to bottle feeding. Still there are so many mothers who give up on it because circumstances wouldn’t allow it. We will keep opening more nursing rooms in other locations and campaign for breastfeeding.”