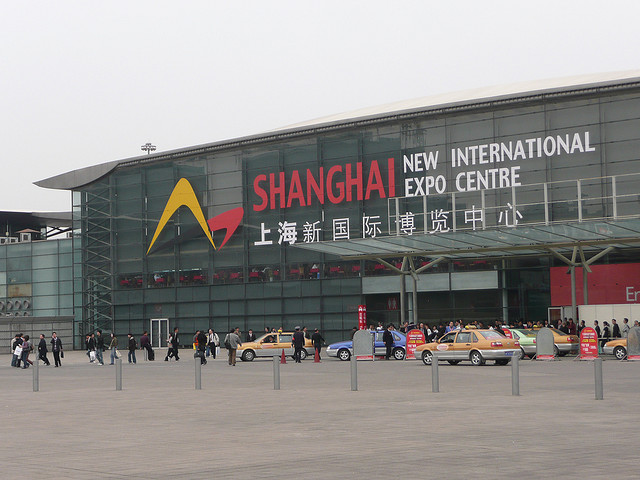 New tradeshow launches in Shanghai in May 2015 to showcase innovation (image: mjaniec/ Flickr)

SHANGHAI, July 17, 2014 (Korea Bizwire)–The Consumer Electronics Association (CEA)® today announced it will  produce the 2015 International CES Asia scheduled to run May 25-27 in  Shanghai, China. This inaugural event will take place at the Shanghai  New International Expo Center (SNIEC) and will draw global businesses to  showcase the latest products and technologies entering the Asian  marketplace. CEA is co-organizing the event with Intex Shanghai Co.,  Ltd., a prominent producer of international tradeshows in China.

“We are thrilled to announce the launch of CES Asia,” said Gary Shapiro,  president and CEO of CEA. “China is a critical driver of the global tech  industry with an incredible opportunity to accelerate its innovation  output. At CES Asia, attendees will experience the innovation that  defines the CE industry, with exclusive access to some of the top brands  from China and around the world.”

The Chinese economy is on pace to become the largest in the world with  consumer electronics (CE) retail sales in China expected to reach $154.4  billion in 2014. CES Asia provides a unique opportunity for global  companies with operations in China to expand market share in this  rapidly growing, critical market.

CEA has not sponsored a China tradeshow since its 2012 participation  with SINOCES. Shanghai has a long history as a global trading city and  is a major international destination with top-notch convention  facilities and world-class hotels. With two international airports and a  population of more than 24 million, the city of Shanghai is the center  of commerce in China and one of the world’s leading cities.

“We are designing the show so that innovative companies from large  economies including the U.S., China, Japan, South Korea and emerging  countries in Southeast Asia can garner increased attention and gain a  stronger foothold in the Chinese marketplace,” said Karen Chupka, senior  vice president of corporate business strategy and the International CES,  CEA. “Key global businesses will come to this event to grow and  reinforce their brands to CE industry executives, foreign buyers, media  and a limited number of consumers from China.”

From tech powerhouses to innovative startups, the entire consumer  technology ecosystem will be on display at CES Asia, which will span  8,500 net square meters of exhibit space in its first year. Major themes  and emerging product categories, including 3D printing, robotics,  sensors, the Internet of Things and wearables, will be prominently  featured across the show floor and in the conference program. At least  the following major companies will exhibit, sponsor and/or attend the  2015 CES Asia:

Also, CEA will host a special meeting of its 45 top-level member Board  of Industry Leaders in conjunction with CES Asia that will bring leaders  of global technology companies to Shanghai for the launch event.

Exhibit sales will begin in August 2014 and registration will open at  the end of this year. For more information, visit CESAsia.com  and watch the CES Asia launch video here.

About the International CES Asia:

Owned and produced by the Consumer Electronics Association (CEA)®  and co-organized by Intex, the International CES Asia will serve as the  premier event for the consumer technology industry, showcasing the full  breadth and depth of the innovation value-chain in the Asian  marketplace. Key global businesses will come to this new event to grow  and reinforce their brand by showcasing the latest products and  technologies to CE industry executives, foreign buyers, international  media and a limited number of consumers from China. Attendees will have  exclusive access to some of the largest brands from China and around the  world, while celebrating the innovation that defines the CE industry.

The International CES is the world’s gathering place for all who thrive  on the business of consumer technologies. It has served as the proving  ground for innovators and breakthrough technologies for more than 40  years—the global stage where next-generation innovations are introduced  to the marketplace. As the largest hands-on event of its kind, CES  features all aspects of the industry. And because it is owned and  produced by the Consumer Electronics Association (CEA), the technology  trade association representing the $208 billion U.S. consumer  electronics industry, it attracts the world’s business leaders and  pioneering thinkers to a forum where the industry’s most relevant issues  are addressed. Follow CES online at www.CESweb.org  and through social media: http://www.cesweb.org/social

Intex is the sub joint venture company of CCPIT (China Council for the  Promotion of International Trade) Shanghai, which started 1992. Intex is  a prominent producer of international tradeshows in China, owning venues  in Shanghai, and managing various exhibition venues outside of Shanghai.  Intex Shanghai is the vice chairman of SCEIA, the Deputy Director of  CAEC and the member of UFI. As the first venue management company that  imported the first level pattern of management and experience in  Shanghai, it is jointly invested by Shanghai Hongqiao E&T Development  Zone United Development Co., Ltd., Council for the Promotion of  International Trade Shanghai and Istithmar P&O Estates FZE. Intex was  the first international exhibition center passing ISO9001 quality  certification in China and has a stand-out reputation in the domestic  exhibition industry.