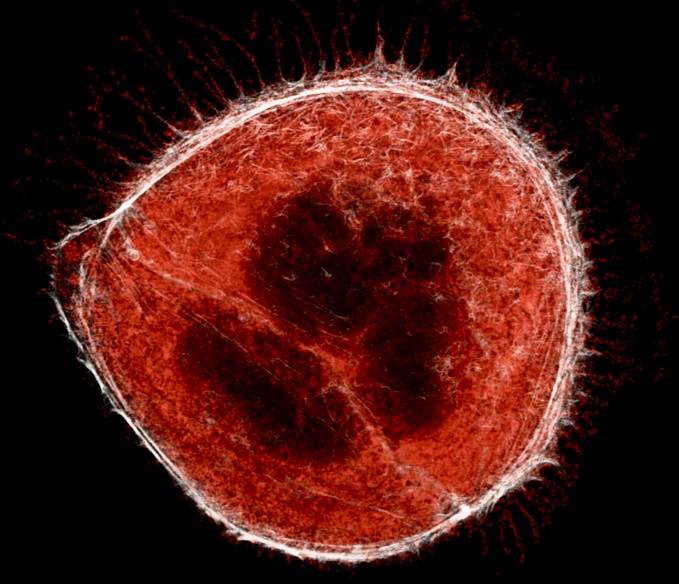 SAN FRANCISCO, June 28 (Korea Bizwire) — Pioneering a new paradigm in drug discovery by leveraging biological understanding of how a virus interacts with its host, an international team of researchers conducted a global analysis of proteins in human cells to determine mechanisms by which SARS-CoV-2 shifts cellular activity in infected cells. During the study, the researchers discovered for the first time that cells infected with SARS-CoV-2 exhibit filopodia, stringy arm-like extensions, which may explain rapid viral spread throughout the body.

The quantitative study, ‘The Global Phosphorylation Landscape of SARS-CoV-2 Infection’ online now in Cell, builds upon a previously published novel “blueprint” of the 332 human proteins that interact with 27 SARS-CoV-2 viral proteins. In an extension of the blueprint, the scientists evaluated all human proteins that exhibited changes in phosphorylation. Phosphorylation, the addition of a phosphoryl group to a protein by an enzyme class called kinases, plays a pivotal role in the regulation of most cell processes including the production of the cytoskeleton, protein function, cell-to-cell communication, cell growth and cell death. The scientists collaborated with Zoic Labs to overlay this new phosphorylation information onto the interactive version of the previously published protein-protein interaction map.

“By conducting a systematic analysis of the changes in cell programming through phosphorylation when SARS-CoV-2 infects a cell, we identified several key factors that will not only inform the next areas of biological study but also therapies that may be repurposed to treat patients with COVID-19,” said Nevan Krogan, Ph.D., director of the Quantitative Biosciences Institute (QBI) at the School of Pharmacy at UC San Francisco, senior investigator at Gladstone Institutes, and lead investigator of the study. Key scientists from UCSF, QBI’s Coronavirus Research Group (QCRG), Gladstone, EMBL’s European Biosciences Institute (EMBL-EBI) in Cambridge, England, Icahn School of Medicine at Mount Sinai in New York, Institut Pasteur in Paris, University of Freiburg in Germany and NIH Rocky Mountain Laboratories in Montana participated in the research.

”Our understanding of how this virus co-opts human cells continues to be a fruitful source of key virus-host cell interactions, which are leading us to promising therapies already in existence that can disrupt the virus’ clever way of surviving and thriving within the body,” continued Dr. Krogan.

Phosphorylation of Viral and Human Host Proteins During Infection

The team determined that 40 of the 332 human proteins that interact with SARS-CoV-2 were significantly differentially phosphorylated in cells infected with SARS-CoV-2. In addition, they identified 49 human kinases, out of a total of 518, that showed changes – either upregulation or downregulation – of phosphorylation activity.

The most strongly hijacked kinases include casein kinase II (CK2), kinases within the p38/MAP kinase (p38/MAPK) pathway, cyclin-dependent kinases (CDKs) and phosphatidylinositol 5-kinase (PIKFYVE), all of which fall within a set of cell signaling pathways. Because kinases possess certain structural features, they are very druggable targets with more than 500 compounds commercially available or in development.

Researchers then set out to evaluate whether existing compounds would inhibit SARS-CoV-2 in infected cells in which specific kinases had been manipulated by the virus.

Specifically, the researchers found that:

“We are encouraged by our findings that drugs targeting differentially phosphorylated proteins inhibited SARS-CoV-2 infection in cell culture,” said Kevan Shokat, Ph.D., professor in the department of Cellular and Molecular Pharmacology at UC San Francisco (UCSF). “We expect to build upon this work by testing many other kinase inhibitors while concurrently conducting gene knockout experiments with RNAi technologies to continue to identify both the underlying pathways and additional potential therapeutics that may intervene in COVID-19 effectively.”

Importantly, additional studies are needed to further characterize the anti-viral potential of the compounds identified through this analysis.

Interestingly, while studying the impact of SARS-CoV-2 on CK2, high resolution imaging of virally infected cells produced by the NIH/NIAID/Rocky Mountain Laboratories and University of Freiburg revealed actin-rich filopodia containing viral proteins. Human CK2 and the viral N protein were found co-localized within the filopodia, suggesting that SARS-CoV-2 hijacks CK2 and co-opts it into creating these tentacle-like protrusions that poke holes in their neighboring cells.

Conversely, other viruses including vaccinia, Ebola and Marburg take over the host cell cytoskeleton to promote egress and rapid cell-to-cell spread. However, in SARS-CoV-2 infected cells, the filopodia exhibit longer tentacles and branches, enabling more aggressive transmission than some other viral infections.

“The distinct visualization of the extensive branching of the filopodia once again elucidates how understanding the biology of virus-host interaction can illuminate possible points of intervention in the disease,” continued Dr. Krogan. “Our data driven approach for drug discovery has identified a new set of drugs that have great potential to fight COVID-19, either by themselves or in combination with other drugs, and we are excited to see if they will help end this pandemic.”

About QBI: The Quantitative Biosciences Institute (QBI) is a University of California organized research unit reporting through the UCSF School of Pharmacy. QBI fosters collaborations across the biomedical and the physical sciences, seeking quantitative methods to address pressing problems in biology and biomedicine. Motivated by problems of human disease, QBI is committed to investigating fundamental biological mechanisms, because ultimately solutions to many diseases have been revealed by unexpected discoveries in the basic sciences. Learn more at qbi.ucsf.edu.

About UCSF: The University of California, San Francisco (UCSF) is exclusively focused on the health sciences and is dedicated to promoting health worldwide through advanced biomedical research, graduate-level education in the life sciences and health professions, and excellence in patient care. UCSF Health, which serves as UCSF’s primary academic medical center, includes top-ranked specialty hospitals and other clinical programs, and has affiliations throughout the Bay Area. Learn more at ucsf.edu or see our Fact Sheet.

About Gladstone Institutes: To ensure our work does the greatest good, Gladstone Institutes focuses on conditions with profound medical, economic, and social impact—unsolved diseases. Gladstone is an independent, nonprofit life science research organization that uses visionary science and technology to overcome disease. It has an academic affiliation with UC San Francisco. Learn more at gladstone.org.