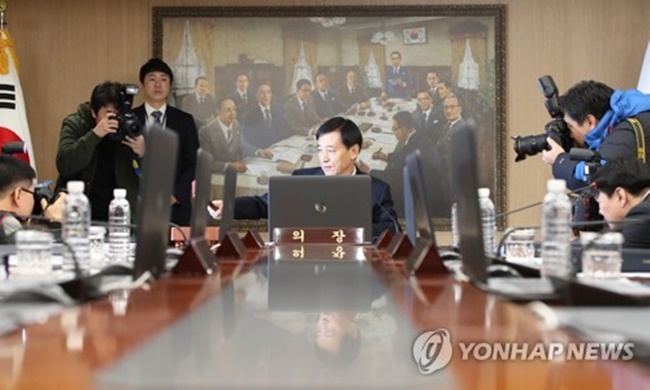 SEOUL, Dec. 19 (Korea Bizwire) – The South Korean central bank will take a more prudent stance on tightening its monetary policies in the future by checking the pace of economic recovery and inflation pressure, minutes from the latest rate-hike meeting showed Tuesday.

The Bank of Korea’s (BOK) monetary policy board meeting for November raised the key rate by a quarter percentage point to 1.5 percent, marking the first upward adjustment since June 2011. The BOK said one board member voted against the rate-hike decision.

According to the minutes from the November meeting, members of the BOK’s monetary board were negatively inclined towards further rate increases as they needed to look closely into the movement of consumer prices and private consumption.

“The central bank has to remain expansionary until we reach closer to the target inflation,” a member who voted for the rate-hike decision was quoted as saying. “The pace of the further rate increase should be decided in a more prudent manner based on the changes of core inflation, recovery of private consumption and the condition of the global financial market.”

Two other officials also stressed the BOK needs more time to watch the market conditions like the economy, consumer prices and household debt.

Cho Dong-chul, who voted to hold interest rates unmoved at a record low of 1.25 percent, said it is still uncertain whether the central bank should revert to a tightened monetary policy.

“The recent upturn in the South Korean economy is largely driven by favorable global economic change, and signs of economic recovery are not strong,” said Cho. “Against this backdrop, a faster monetary tightening may dampen productivity and make it more difficult to reach the target inflation range.

The BOK set its target inflation at 2 percent for 2017, but it gained an 11-month low of 1.3 percent in November due to a sharp drop in vegetable prices.