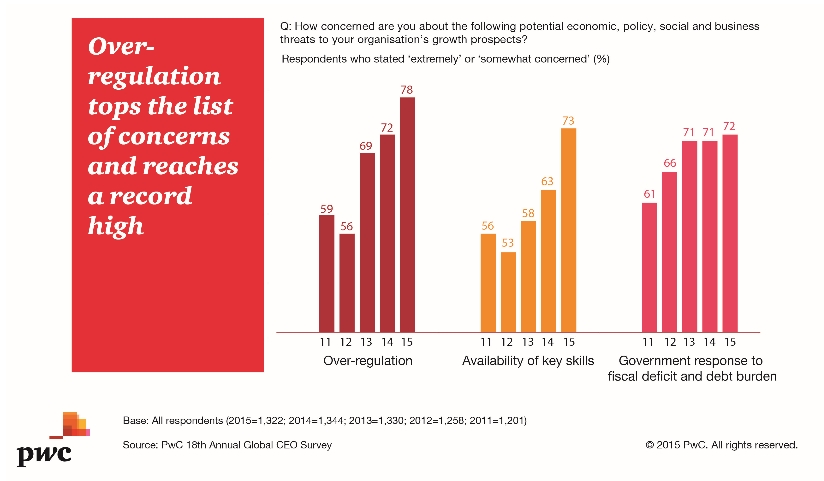 Results of the PwC’s 18th Annual Global CEO Survey were released at the opening of the World Economic Forum Annual Meeting in Davos, Switzerland. (image: PwC)

But Confidence in Growth of Their Own Companies Remains Steady

DAVOS, Switzerland, Jan. 20, 2015 (Korea Bizwire) — Fewer CEOs than last year think global economic growth will improve over the next 12 months, though confidence in their ability to achieve revenue growth in their own companies remains stable, say the more than 1,300 CEOs interviewed in PwC’s 18th Annual Global CEO Survey. Results of the survey were released today at the opening of the World Economic Forum Annual Meeting in Davos, Switzerland.

Infographics accompanying this release are available at http://media.globenewswire.com/cache/3140/file/31292.jpg

Regionally, the results show wide variations. CEOs in Asia Pacific are the most optimistic about the global economy with 45% anticipating improvement, followed by the Middle East (44%) and North America (37%). On the other hand, only 16% of CEOs in Central and Eastern Europe expect economic improvement. CEOs in emerging economies like India (59%), China (46%) and Mexico (42%) are more optimistic about the economy than those in developed economies like the US (29%) and Germany (33%).

Despite the overall declining outlook for the global economy, CEOs remain confident about prospects for their own company; 39% worldwide said they are ‘very confident’ their company’s revenues will grow in the next 12 months. That’s the same as last year; though up slightly from 36% in 2013.

CEOs in the Asia Pacific region (45%) are most confident of revenue growth, about the same as last year. The Middle East is still one of the most optimistic regions with 44% of CEOs very confident of revenue growth, although this is down markedly from last year’s 69%. CEO confidence in growth is higher in North America, rising to 43% from 33%. CEOs in Western Europe (31%) and Central and Eastern Europe (30%) are least optimistic about their company’s growth prospects.

“The world is facing significant challenges: economically, politically and socially. CEOs overall remain cautious in their near-term outlook for the worldwide economy, as well as for growth prospects for their own companies. While some mature markets like the US appear to be rebounding, others like the Eurozone continue to struggle. And while some emerging economies continue to expand rapidly, others are slowing. Finding the right strategic balance to sustain growth in this changing marketplace remains a challenge.

“CEO confidence is down notably in oil-producing nations around the world as a result of plummeting crude oil prices. Russia CEOs, for example, were the most confident in last year’s survey, but are the least confident this year. Confidence also slipped among CEOs in the Middle East, Venezuela, and Nigeria.”

CEOs rank the US as their most important market for growth over the next 12 months, placing it ahead of China for the first time since we started asking this question five years ago. Overall, 38% of CEOs say the US is among their top-three overseas growth markets, compared with 34% for China, 19% for Germany, 11% for the UK and 10% for Brazil.

CEOs say they will undertake a number of business strategies to strengthen their companies in the coming 12 months. Overall, 71% say they will cut costs, 51% will form strategic alliances or joint ventures, 31% will outsource a business process or function, and 29% will complete a domestic M&A (up from 23% last year).

What worries CEOs most?

Over-regulation again tops the list of concerns, named by 78% of CEOs worldwide. This is up 6 points from last year and is now at the highest level ever seen in the survey. Countries where concern about over-regulation is particularly high include Argentina (98%), Venezuela (96%), the US (90%), Germany (90%), the UK (87%), and China (85%).

Other top concerns cited by CEOs are availability of key skills (73%), fiscal deficits and debt burdens (72%), geopolitical uncertainty (72%), increasing taxes (70%), cyber threats and the lack of data security (61%) – going up rapidly from 48% last year – as well as social instability (60%), shifting consumer patterns (60%) and the speed of technological change (58%).

CEOs concerns are up in all areas compared to last year with the exception of energy costs where they are slightly down at 59%.

A third of CEOs worldwide say their company has recently entered or considered entering one or more new industries in the last three years, and more than half (56%) believe that organisations will increasingly compete in new sectors in the next three years. CEOs think a significant competitor is emerging or could emerge from the following sectors: technology (32%), retail and wholesale distribution (19%), and communications, entertainment and media (6%).

CEOs say the top priority of government should be maintaining a competitive and efficient tax system, cited by 67% of survey respondents. But only 20% of CEOs said their country is successful in creating such a system. Likewise, access to a skilled workforce is highly valued by 60% of CEOs, but just 21% say enough skilled workers are available in their country. Other government priorities for CEOs include physical infrastructure (49%), affordable capital (29%), and digital infrastructure (28%). One notable issue, reducing the risk of climate change, is given priority by only 6%.

The emergence of digital technology has completely changed how companies do business; 58% of CEOs are concerned about the speed of technological change compared with 47% last year. Mobile technologies are seen by 81% of CEOs as most important to their company, followed by data mining and analysis (80%), cybersecurity (78%), socially enabled business processes (61%) and cloud computing (60%). Companies get the most benefit from digital technologies in the areas of operating efficiency (88%), data and data analytics (84%) and customer experience (77%).

“CEOs know they must be adaptable to disruptive changes in technology and in their markets. They need to put technology at the core of their business to create value for customers. Finding new ways of thinking and working in this new competitive landscape is critical to success,” concludes Dennis Nally.

Half of CEOs around the world say they will increase their headcount over the next 12 months, while 21% expect a decrease (this remains about the same as last year).  As CEOs seek to meet the challenge of finding the right people, 81% say they are looking for a broader range of skills. Nearly two-thirds of CEOs’ organisations (64%) have a diversity and inclusiveness strategy – but nearly a third don’t. Or those who have such strategies, 85% say it has improved their bottom line.

The full survey report with supporting graphics can be downloaded at www.pwc.com/ceosurvey.

2.  List of country/regional CEO saying they are very confident of 12 month growth.

The PwC logo is available at http://www.globenewswire.com/newsroom/prs/?pkgid=2684