Numbering around 200 members in total, cheerleading teams from eight different countries are participating in a cheerleading event as part of the PyeongChang 2018 Winter Olympics. (Image: Korea Cheerleading Association)

SEOUL, Feb. 20 (Korea Bizwire) – Numbering around 200 members in total, cheerleading teams from eight different countries are participating in a cheerleading event as part of the PyeongChang 2018 Winter Olympics.

From February 19 through 25, the eight delegations will take turns putting on performances throughout Gangneung and Pyeongchang.

In between performances, cheerleading team members will drop by the hockey and skating rinks to cheer on the athletes with the audience.

The highlight of the cheerleading teams’ stay at the Winter Olympics is expected to be their street performance on February 24 on Gangneung’s Wolhwa Street, and an additional show that is scheduled to take place before the closing ceremonies the next day. On these two days, all eight teams will perform.

Among those visiting, the University of Kentucky team and Canada’s Flyers All-Starz enjoy a strong reputation, having been consistent winners of numerous cheerleading competitions. 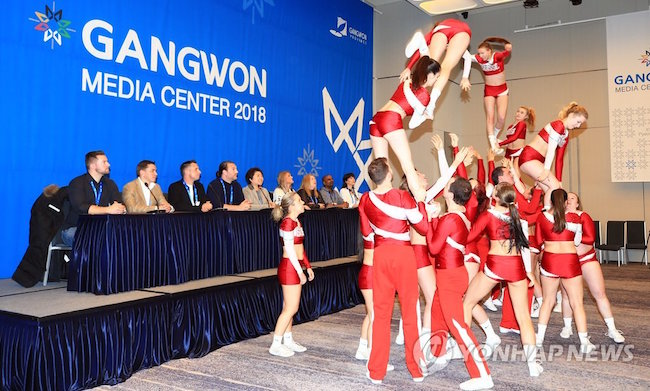 After the closure of the Winter Olympics, the cheerleading teams will head to Wonju, where they will participate in the Wonju International Cheerleading Festival to be held at Wonju Gymnasium on February 26.