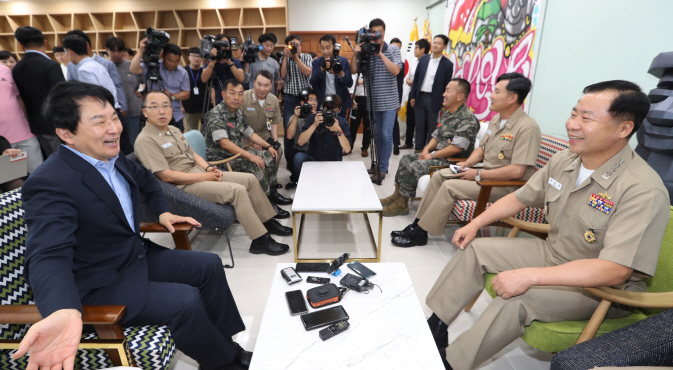 JEJU, Aug. 30 (Korea Bizwire) — The Chief of Naval Operations has accepted the demands made by Jeju residents in Gangjeong Village asking for an apology, forecasting a possible resolution to the ongoing conflict between the villagers and the navy.

Yesterday morning, Adm. Sim Seung-seob and his staff visited Gangjeong Village in the city of Seogwipo, where the Jeju naval base was constructed.

At the village, Adm. Sim met with village leaders, with whom he exchanged words regarding the International Fleet Review to be held this year.

During the meeting, the villagers requested a formal apology from the naval chief concerning the conflicts that arose during the naval base construction process. Adm. Sim immediately responded, offering to make an apology.

However, the admiral said that the timing of the apology would have to be scheduled for his next trip to Jeju.

The governor asked the admiral to “communicate actively with villagers,” to which the admiral responded that he would continuously make sincere efforts to solve the pending issues.

The admiral also thanked the residents of Jeju for their interest in the International Fleet Review to take place on the island.