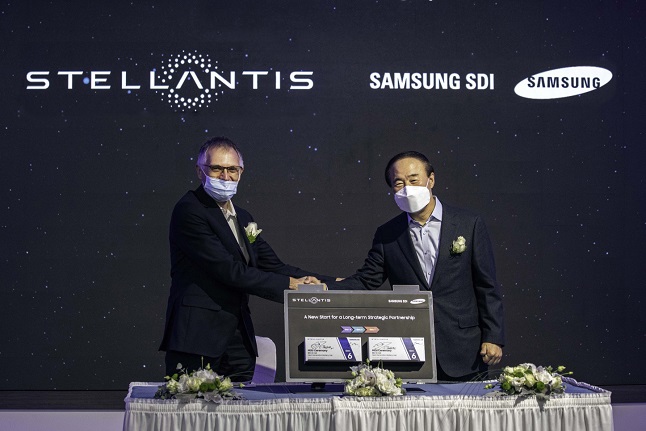 The meeting between Samsung SDI CEO Jun Young-hyun and Carlos Tavares, CEO of Stellantis, came after the two companies announced a plan to jointly build an EV battery plant in the U.S., with the production to begin in the first half of 2025. It will be Samsung SDI’s first EV plant in the U.S.

“We discussed ways to continue the business cooperation and maximize the synergy in the future,” a Samsung SDI official said.

They also held a ceremony marking the signing of their partnership and toured the production plant, according to SDI officials.

The Hungary plant, established in 2001, produced cathode ray tubes and plasma display panels for television sets, before being converted to a lithium ion battery production facility in 2016.

Since last month, it has been producing Samsung SDI’s high-performance “Gen.5.”

The latest U.S. EV battery plant deal paves the way for Samsung SDI to secure a stable supply foothold in America ahead of the free trade agreement among the U.S., Canada and Mexico, which requires carmakers to sell EVs installed with locally produced parts.

The trade deal will take effect in July 2025.

The deal also gives Stellantis more room to diversify its EV battery supplies as it is pushing to increase EV sales in North America, amid its active investment in the transition to EVs.

The U.S. plant, whose output will be supplied to Stellantis’ plug-in hybrid and EV lineups from its North America production lines, will have an annual production capacity of 23 gigawatt hours (GWh) and aims to have 40 GWh going forward.