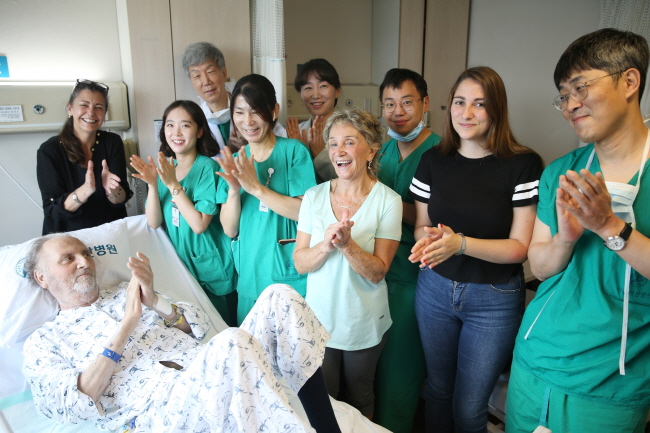 In March, Alberto (L) came to South Korea with his family, and received a liver transplant from his eldest and youngest daughters. (image: Asan Medical Center)

Alberto, 62, had been working as a civil engineer in Chile when he began to suffer from severe fatigue and jaundice last September.

He was soon diagnosed with both liver cirrhosis and cancer, and was asked to prepare for his last moments at a convalescence hospital.

Alberto soon regained hope, however, when he met with an Ecuadorian surgeon who went to Asan Medical Center in South Korea to receive training on liver transplant.

The doctor even sent a letter to the surgical team at Asan Hospital, asking them to conduct a liver transplant for Alberto.

For the surgical team, however, the decision was not easy to make. The livers available were too small for Alberto, who is 6 feet tall and weighs 200lbs.

Liver transplantation from brain death donors, too, was a risky move due to technical complications involving the extensive damage the cancer had already done to Alberto’s liver.

At this stage, the only available option was a liver transplantation from two live donors.

Today, more than 95 percent of all two-for-one liver transplantations are conducted at Asan Medical Center.

The surgical team, after checking Alberto’s medical records and video reports, decided that they could go ahead with the surgery.

In March, Alberto came to South Korea with his family, and received a liver transplant from his eldest and youngest daughters. The surgery was a success.

“Removing the portion of the liver damaged by cancer and connecting the area with the livers of Alberto’s daughters was the toughest part of the surgery, and the recovery following the surgery was much slower than we expected,” said Prof. Kim Ki-hun from Asan Medical Center.

“We were able to overcome our difficulties thanks to joint support from the anesthesiology department, the intensive care unit, the ward nurses, and the infectious disease unit.”

Alberto and his family thanked the surgical team for “giving back the ordinary happiness of everyday life.”