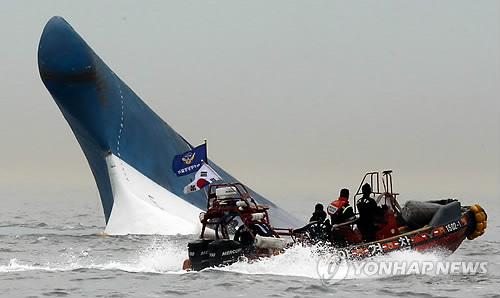 According to the Ministry of Oceans and Fisheries, the consortium led by China’s state-run Shanghai Salvage was picked as the preferred bidder for the operation. (image: Yonhap)

SEOUL, July 15 (Korea Bizwire) — A consortium led by a Chinese salvage company has been chosen as the preferred bidder for a multimillion dollar project to recover a sunken South Korean ferry, the South Korean government said Wednesday.

According to the Ministry of Oceans and Fisheries, the consortium led by China’s state-run Shanghai Salvage was picked as the preferred bidder for the operation.

The next was the consortium led by China Yantai Salvage, another state-run Chinese company, followed by another consortium comprised of worldwide salvage firm Titan Salvage and Dutch maritime operations company Svitzer, the ministry said.

Should negotiations with the Shanghai Salvage-led consortium fall through, the government will move on to the next consortium on the list until a final agreement is reached.

The focus will be made on technological prowess in the maritime salvage project, rather than on price, as South Korea seeks to retrieve the sunken ship without further damage in order to prevent the loss of any bodies believed to remain inside.