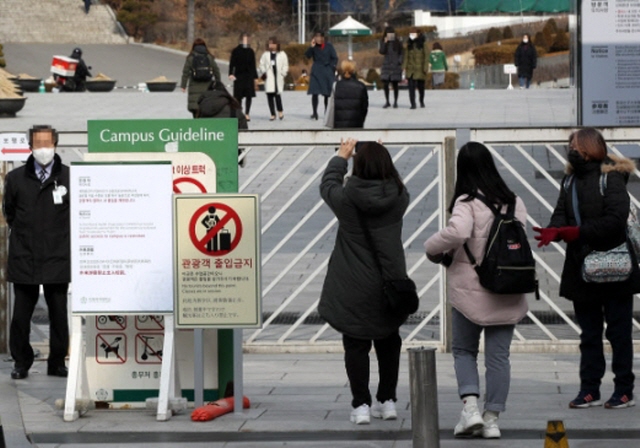 Foreign tourists take photos in front of the entrance of Ewha Womans University in Seoul on Feb. 7, 2020, as the school restricts their visits amid the escalating coronavirus crisis. (Yonhap)

SEOUL, Feb. 10 (Korea Bizwire) — South Korean universities are asking Chinese students to engage in voluntary quarantine to prevent the spread of the novel coronavirus originating in Wuhan, causing massive confusion among Chinese students who are no longer allowed to access school dorms.

“People say goshiwons are the way to go if you’re turned down at a hotel,” “I am worried if goshiwons will take me in,” are some of the comments seen on a chatroom shared by Chinese students currently enrolled at Kyunghee University.

Goshiwons are small, cheap living quarters typically favored by students or those preparing for government exams or job interviews.

The university recently imposed a two-week school dormitory ban on students who have visited China, Hong Kong, or Macau, without offering any alternatives for accommodation.

“We don’t really understand what the school wants to do,” said one student in the chatroom. “I don’t think the school is properly handling the situation.”

University authorities said they are currently renovating one of the dormitory buildings into a quarantine facility for students who have recently visited China.

Korea University also imposed a two-week ban on students who have visited China, asking them to stay at a designated location for a certain period of time.

The ‘designated location,’ however, has yet to be announced.

“I got my own place to stay, but I am worried about others who chose to stay in the school dormitory,” said a Chinese student.

“Many newcomers have no other choice but to stay at a hotel, since they don’t have any friends who have their own apartment. What’s worse, the hotels, too, turn them down.”

A number of hotels in downtown Seoul were found to have rejected Chinese guests.