“The Rangers won’t just be content with reaching the postseason. This is only the beginning, and we need one more victory to take the AL West.”

“This feels incredible. I feel as though I’ve been playing baseball all my life to enjoy moments like this. I can’t even describe my feelings. But we’d like to add one more win tomorrow to enjoy the division title.” 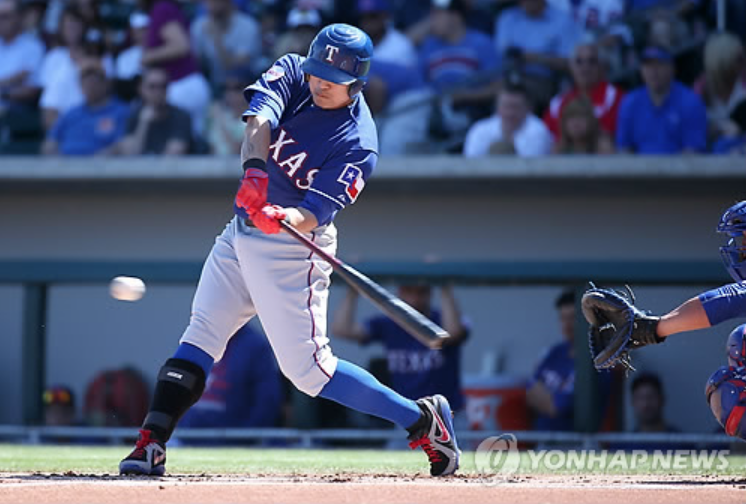 Choo Shin-soo of the Texas Rangers (Image courtesy of Yonhap)

ARLINGTON, Texas, Oct. 1 (Korea Bizwire) – Choo Shin-soo of the Texas Rangers saw his hitting streak come to an end, but drew a key walk as the Rangers defeated the Los Angeles Angels 5-3 to clinch a playoff spot Thursday.

Choo went 0-for-3, ending his eight-game hitting streak, but drew a one-out walk to load the bases in the fifth inning, before coming around to score on Adrian Beltre’s three-run double that put the Rangers ahead 4-1.

The Rangers (87-72) have secured at least one of the two Wild Cards in the American League, while the Angels (83-76) have been eliminated from the AL West race.

The Angels are one game behind the Houston Astros (84-75) for the second Wild Card spot, with the New York Yankees (87-72) having clinched the first Wild Card.

The Rangers are three games up on the Astros in the division with three to play, and one more Texas victory or a Houston loss will give the Rangers their sixth division title.

The Rangers, who had the worst record in the AL last year, were all but given up for dead this spring, when their No. 1 starter, Yu Darvish, was ruled out for the season with an elbow injury. After an up-and-down first half, the Rangers made a push over the past two months, while acquiring veteran left-hander Cole Hamels at the trade deadline.

“We lost Yu Darvish and have had some injuries, and no one really picked us to contend this year,” Choo said. “But the players here gave their hearts out, and it’s great to see our efforts bear fruit.”

In that 2013 Wild Card Game, Choo homered and scored twice as the Reds fell to the Pittsburgh Pirates 6-2. Choo said his performance in his postseason debut has given him confidence that he can come through for the Rangers, too.

If the regular season ended Thursday, the Rangers would play the Kansas City Royals, the AL Central winner, in the American League Division Series. The Yankees and the Astros would duel in the one-and-done Wild Card Game, with the winner earning a date with the AL East champ Toronto Blue Jays.