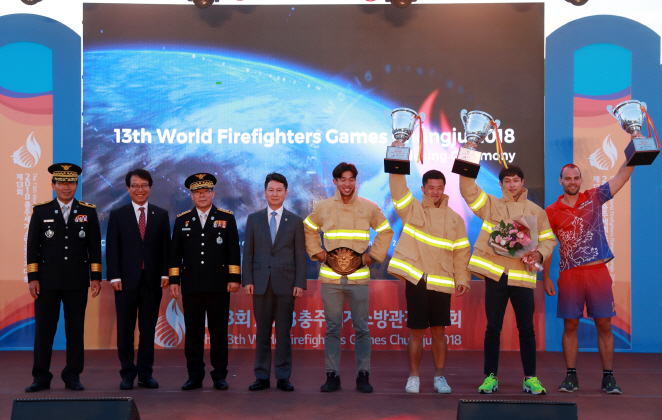 The winners of the 13th World Firefighters Games pose during an awards ceremony in Chungju, North Chungcheong Province, on Sept. 17, 2018. (image: WEF)

CHUNGJU, Sept. 18 (Korea Bizwire) — The 13th World Firefighters Games (WFG) has wrapped up its eight-day schedule in the South Korean city of Chungju.

Some 6,600 firefighters from 63 countries competed in the biennial international event that ended Monday.

Hong Kong, which sent the largest delegation of 230 firefighters, secured the top post in the medal standings with 241 gold medals, trailed by South Korea with 239 and Russia with 32.

Some 150 firefighters contended in the four-day TFA sport, which consists of hose pulling, an obstacle course, and a tower and stair climbing. South Korea’s 32-year-old Hong Beom-seok grabbed the title with a time of 4 minutes and 48.29 seconds.

Subsidiary events included a firefighting industry expo and meetings on firefighting polices, a fire investigation, an emergency medical service and a variety of cultural programs.

“We’re surprised at the scale and operation of the Chungju Games. We will also make sincere preparations to make the 2020 Aalborg Games a venue for the friendship and unity of all firefighters around the world,” an Aalborg organizing committee official said.

The Danish city of Aalborg was chosen as the next host.

The WFG was inaugurated in Auckland, New Zealand, in 1990 to promote world firefighters’ friendship and competition in sports.