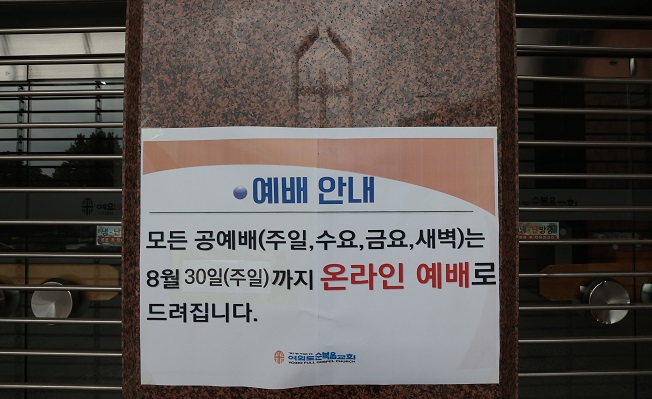 This sign posted on the outer wall of Yoido Full Gospel Church in Seoul on Aug. 23, 2020, displays a notice that all services through Aug. 30 will be held online, in accordance with stricter social distancing guidelines. (Yonhap)

SEOUL, Aug. 23 (Korea Bizwire) — Under the government directive to hold socially distanced services, churches in Seoul remained empty on Sunday with some exceptions.

This was the first Sunday since the government increased the intensity of its social distancing guidelines in Seoul and its surrounding regions a week ago.

Placed under Level 2 in the three-tier system, churches in those areas are only allowed to organize online services, with only essential personnel permitted inside.

On Saturday, the government expanded Level 2 social distancing to the rest of the country.

Churches have recently emerged as a hotbed of coronavirus outbreaks, with cluster infections tied to regular services and small gatherings by church members.

South Korea has reported over 2,600 new COVID-19 cases over the past 10 days, hundreds of them linked to churches in the greater Seoul area.

Some of the capital city’s major churches vowed to keep their gates closed on Sunday and comply with quarantine guidelines.

Onnuri Church in Yangjae, southern Seoul, lived up to its word, as attested by the empty parking lot at 9 a.m. Sunday and the sign on the digital display board saying all services would now be available on YouTube.

Yonsei Central Baptist Church in Guro Ward, western Seoul, had about a dozen officials standing near the entrance to keep vehicles or members from entering. Local officials had suspected Yonsei might organize an in-person service.

Officials from Guro’s ward office and local police officers checked around 100 churches in the morning to see if there had been any violations of distancing rules.

Eunpyeong Jeil Church in the northwestern ward of Eunpyeong has been a vocal critic of the government’s decision to ban services on sight, but it still adhered to the online-only rules on Sunday. 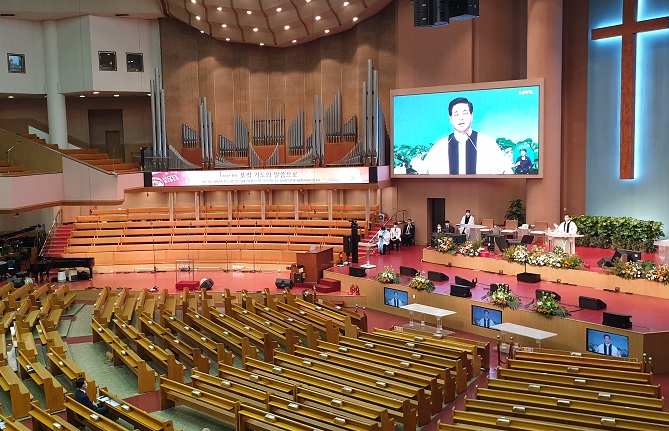 This photo provided by Yoido Full Gospel Church in Seoul on Aug. 23, 2020, shows a service being broadcast online for its members, in accordance with stricter social distancing guidelines.

At some other churches, a few members managed to sneak into services.

Sarang Church in Seocho Ward, southern Seoul, permitted about 10 members to enter the building. They received sprays of sanitizer at a quarantine station and digitally logged their entry using quick response (QR) codes.

Once inside, those members weren’t allowed to enter the main hall and were instead led into an auxiliary room in the basement.

“We had already informed our members that we wouldn’t have in-person services, but about 70 people still showed up,” a Sarang Church official explained.

“We couldn’t just turn away everybody. We had about 15 people in that extra room, which usually holds 500, and made sure they maintained safe distances.”

Sarang Jeil Church in Seongbuk Ward, northern Seoul, which has been linked to over 800 COVID-19 cases through Sunday, remained deserted, save for a handful of members camped outside and a Seongbuk Ward official decked out in medical overalls.