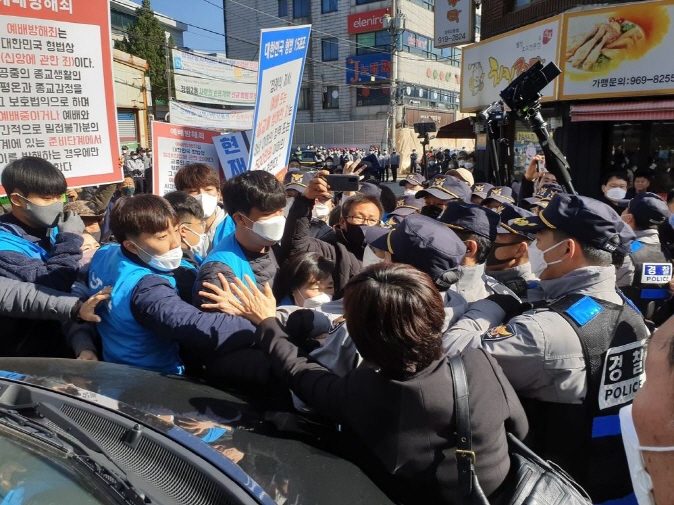 Members of the Sarang Jeil Church in northern Seoul squabble with the police over a church service on March 29, 2020, as they try to press ahead with the service despite a two-week administrative order imposed on the church to prevent further group transmissions of COVID-19 at churches. (Yonhap)

SEOUL, March 29 (Korea Bizwire) — Some Protestant churches in South Korea pressed ahead with their worship services Sunday despite the government’s pleas for stricter social distancing.

As part of the government’s drive for further social distancing, Prime Minister Chung Sye-kyun earlier warned “stern” legal action would be taken against churches that violate quarantine guidelines that include keeping the distance between followers at least 2 meters while attending services and checking congregants’ temperature.

Among the defiant churches was Sarang Jeil Church in northern Seoul, which pressed ahead with weekend religious services on Sunday despite a two-week administrative order requiring the church to abide by guidelines that ban services until April 5.

All members violating the order can face a penalty up to 3 million Korean won (US$2,500).

Worshippers began entering the church at 9 a.m., and over 100 municipal officials and 400 policemen were deployed to the premises to monitor the situation.

Some squabbled with the police as they tried to carry hundreds of plastic chairs from a 5-ton truck into the church.

“The service held today is an undeniable violation of the administrative order that the city government has imposed on the Sarang Jeil Church. … We will strictly impose penalties,” a Seoul city official said.

Other churches also held their routine weekend services, though they tried to comply with the advised guidelines.

Churches such as the Yonsei Central Church in Guro district allowed only registered members to enter the service and disinfected all members and vehicles entering church premises.

Worshippers were asked to write down their names and contact details on a visitors list before entering other churches and to keep their distance from one another during the service.

Manmin Central Church in Guro has emerged as a new hotspot of infections in Seoul.

The Seoul city government said at least 22 COVID-19 patients are linked to the church of a minor religious sect.

At least two patients tied to the church were also found to be working at a call center in Geumcheon Ward in southwestern Seoul, according to the ward office. It plans to conduct coronavirus tests on all 78 workers at the center on Monday.

A call center in Guro was the site of the biggest cluster infection in Seoul and adjacent metropolitan areas, with 158 cases.

Small-scale cluster infections have been reported at Protestant churches in recent weeks after the bulk of cases tied to the Shincheonji religious sect subsided.

Earlier, the health ministry advised public facilities posing a high risk of infection to patrons, such as churches and religious institutions as well as nightclubs and indoor gyms, to close from March 22 to April 5 as part of measures to contain the virus.

South Korea has reported 9,583 confirmed cases of COVID-19, according to the Korea Centers for Disease Control and Prevention. A total of 152 people have died from the virus here.