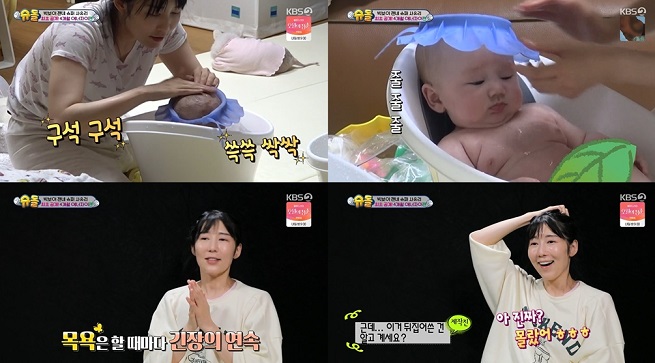 This combined image provided by KBS shows Japanese TV personality Sayuri and her son Zen on “The Return of Superman.”

SEOUL, May 21 (Korea Bizwire) – Sayuri, a Japanese TV personality who lives in Seoul, starts her day before 4 a.m. when her five month-old baby wakes up.

She has to skip her own breakfast as she is occupied feeding and comforting her child.

An unmarried woman who chose to be a single mother, Sayuri gave birth to her son, Zen, through artificial insemination.

Her day and night struggle has been broadcast on KBS every Sunday since early May on the popular child-rearing reality show “The Return of Superman.”

Though her day-to-day routine with the baby seems no different from those of other members of “Superman,” her appearance on the show has garnered attention for being the first open depiction of the life of a single mother on the program that launched in 2013.

“I think I have to love him much more than other moms do,” she said during the show. “I hope he doesn’t feel lonely or want something more, even without his father.”

Last November, the Japanese actress and writer, who started her entertainment career in Korea with the popular “Global Talk Show” in 2007, revealed on her social media that she had become a mother to a son by using a sperm bank in Japan.

She said she made the decision as she did not have much time to have a baby because of an ovarian disease.

“I had only two choices left at that time, immediately marrying a man who I didn’t love and having a test-tube baby, or having and rearing a child all by myself,” she was quoted as saying in an interview with KBS in November.

“I couldn’t choose the first one.”

The 41 year old, who decided to take the unconventional path, had to travel to Japan because it is nearly impossible for an unmarried woman to have a test-tube baby or adopt a child in South Korea.

A guideline by the Korean Society of Obstetrics and Gynecology allows doctors to carry out artificial insemination only to legally married couples, so that a single woman cannot undertake in vitro fertilization.

“I know it is important for a kid to have a dad, but it is also important to embrace other cases,” she said. “I love my dog. My dog and I are not connected by blood, but we’re a family as we spend a lot of time together.” 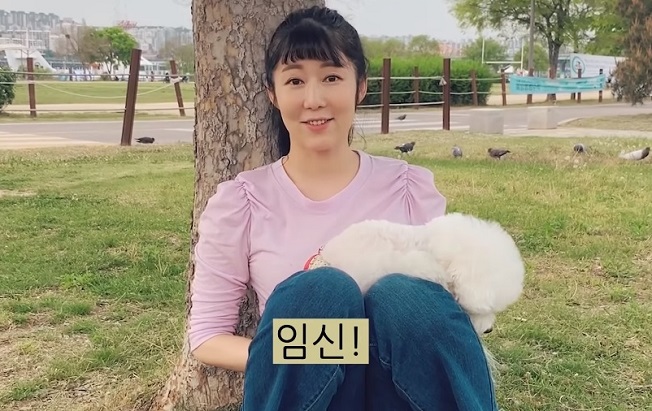 Japanese TV personality Sayuri in this image captured from her YouTube channel. (Yonhap)

Sayuri’s case seems emblematic of the decadeslong weakening of traditional forms of family in South Korea, where Confucianism has dominated everyday life for hundreds of years.

Some conservatives claim that her choice to become a single mother could undermine the “proper” concept of family and encourage forms of family that deviate from the “normal” course of marriage and childbirth.

But civil society has gone along for the ride, saying that it is the time to change the social concept of family and embrace diversity.

Recent statistics show that an increasing number of South Koreans are foregoing marriage and childbearing.

According to government data, the portion of households composed of parents and unmarried children decreased to 29.8 percent in 2019 from 37 percent in 2010.

Instead, new types of families, such as one-person households, have increased to 30.2 percent from 23.89 percent over the cited period.

And the number of new-born babies has been sharply decreasing, with the country’s total birthrate hitting a record low of 0.84 last year.

Moreover, a growing number of young people think marriage is unnecessary. A recent survey showed that 60.9 percent of those aged from 13-24 said they do not think marriage is necessary, up from 49 percent tallied in the previous poll carried out in 2017. 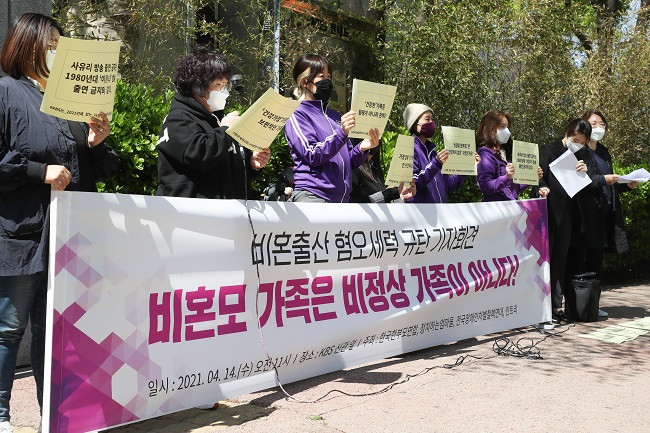 Members of activist groups hold a press conference in front of South Korean broadcaster KBS in Seoul on April 14, 2020 to protest discrimination against single parents. (Yonhap)

Against this backdrop, the South Korean government unveiled its long-term policy plan to expand the legal definition of family to recognize unmarried couples cohabiting, foster families and single-member households.

Under the current family-related laws, only units formed by marriage, blood and adoption are approved as family, which is eligible for social welfare benefits and legal protection.

At the same time, the government will also discuss whether to allow access to sperm donation for unmarried women, after conducting a public opinion survey.

Local civic groups supported the government’s move to encompass people outside of wedlock and keep up with evolving social norms.

“We welcome the change in government’s policy to recognize various forms of family for the sake of individual rights,” the Seoul-based Korea Women’s Associations United said in a statement.

“Gender equality, diversified family and protection of the individual rights of each family member are the demands of our time.”