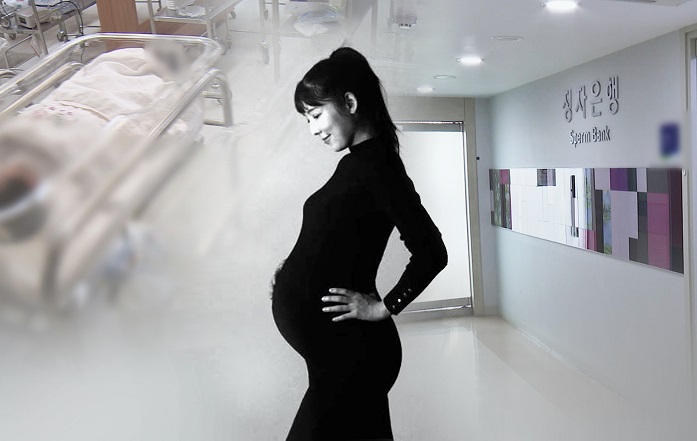 This image, provided by Yonhap News TV, shows Sayuri, a Japanese TV personality based in South Korea, pregnant with a child conceived with sperm from a sperm bank.

SEOUL, April 27 (Korea Bizwire) — The government will push to revise the law to allow parents to give either of their surnames to their children at the time of birth, as part of a broader plan to embrace diverse forms of families, the gender ministry said Tuesday.

Currently, children in South Korea take their father’s surname unless the parents agree at the time of their marriage registration to give their child the mother’s surname.

Under the five-year plan drawn up by the Ministry of Gender Equality and Family, the government will seek to give parents the option of giving either of their surnames to their child at the time of his or her birth registration.

The ministry said the 2021-2025 plan, which will form the basis of its family-related policies, was approved at a Cabinet meeting earlier Tuesday.

It includes a plan to revise a law that allows fathers to force their surnames upon their child after belatedly discovering his or her existence.

The government also seeks to expand the legal definition of family to include cohabiting couples and foster families. Currently the law only recognizes families related by marriage, blood or adoption.

Some of the government’s other plans are updating the law supporting multicultural families to ban hate speech against them, and punishing unmarried partners who engage in domestic violence under the same law that applies to married couples.

The government seeks to toughen legal requirements for parents who refuse to pay child support by subjecting them to potential arrest even after they pay a portion of the amount that is due.

Through June, it will conduct a public opinion survey on the ethical questions of donating sperm and eggs and unmarried women giving birth or having a baby through a surrogate.

Based on the results of the survey, the government will consider whether to conduct a study on the status of sperm donors and a child’s right to know, and whether to change operation rules for medical facilities that make embryos.

The issue of single women getting pregnant via sperm banks created a stir in South Korea after Sayuri, a Japanese TV personality based here, revealed she had given birth to a boy in Japan in November despite being unmarried.

It is illegal in South Korea for single women to get in vitro fertilization.