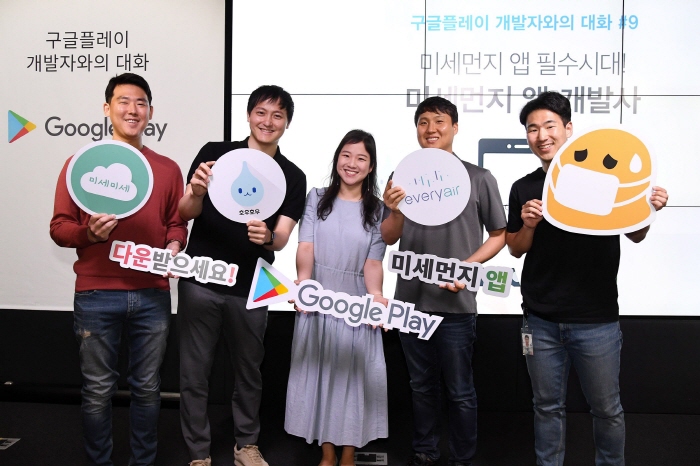 Developers of mobile applications for forecasting weather and an official from Google Inc. pose for a photo at a press conference in Seoul on May 16, 2019. (Yonhap)

The number of downloads of weather mobile apps at Google Play jumped to 2.8 million in the country during the first quarter of this year, from 1.8 million downloads a year earlier, according to a survey conducted by App Annie, an app analytics company.

In recent years, South Korea has been plagued by sandy dust, a considerable amount of which has blown in from mainland China. The wind, carrying industrial pollutants, has become a serious health and social problem here.

“Nine out of 10 (South Koreans) search for fine dust through Google,” Chung Ji-hyun, an engineer from Google, said during a gathering of a number of developers for weather mobile apps and Google engineers at Google Campus Seoul in southern Seoul. Chung said people’s life patterns are changing due to poor air quality.

One of the most popular weather monitoring mobile apps is MiseMise, developed by startup LifeOverFlow, and launched in April, 2015.

The mobile app, which provides real-time information on fine-dust levels, has surpassed 5 million downloads and was chosen as one of the most popular apps by Google Play in 2017.

“Our app provides fine dust information in an intuitive way as people can instantly know the level of air quality through an emoticon located at the center of an app,” Ha Ji-hoon, CEO of LifeOverFlow, told reporters.

The platform, launched in Oct. 2018, provides information on the overall air quality, including fine dust, ultra-fine dust, and ozone levels, in real-time.

The data are collected from sensors installed on carts operated by small vendors selling yogurt and other dairy products on street corners in South Korea, SK Telecom said.

The developers said they plan to step up cooperation to a global level to target the Southeast Asian market faced with worsening fine dust storms.