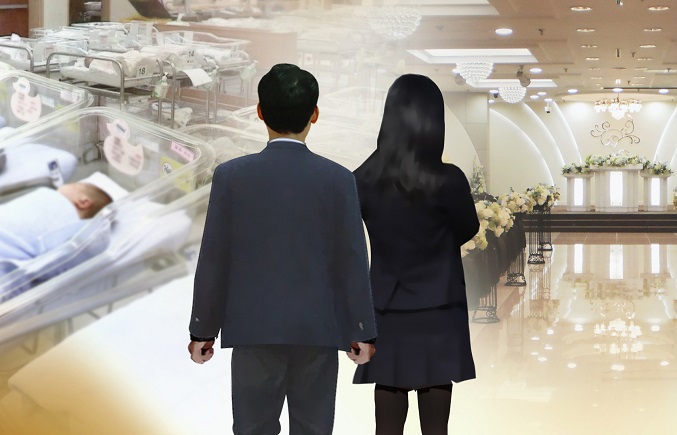 SEOUL, April 24 (Korea Bizwire) — Six out of 10 South Korean young people think it is unnecessary to get married and have kids, a government survey showed Saturday.

The Ministry of Gender Equality and Family conducted the triennial poll on 7,100 people aged between 9 and 24 and 4,800 parental caregivers from November through February.

The survey showed that 60.9 percent of those aged from 13-24 said they do not think marriage is necessary, up from 49 percent tallied in the previous poll carried out in 2017.

Among them, 65.1 percent of female respondents did not agree that marriage was necessary, while 57.1 percent of their male counterparts shared the same opinion.

Also, 60.3 percent of the youths believed it is unnecessary to have kids even after marriage. The figure was 46.1 percent in the 2017 survey.

On the other hand, 59.7 percent of parents or guardians said marriage is necessary, and 47.2 percent thought having kids may not be necessary after marriage.

The gender ministry said the survey showed youths have become more socially and financially pressured to get married and have children over the past three years.

The latest findings also showed that 83 percent of students in elementary, middle and high school said they are satisfied with their school life, down from the previous poll’s 88.3 percent.

The ministry attributed the latest decrease in the satisfaction rate to the yearlong COVID-19 pandemic, which has expanded online classes and kept students at home.