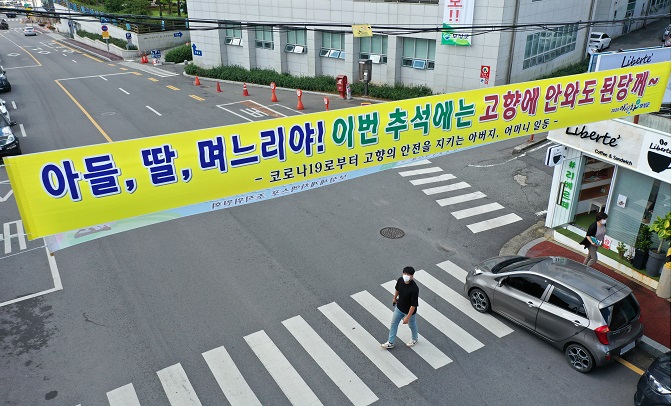 This file photo taken in a rural village in Boseong, southwestern South Korea, on Sept. 14, 2020, shows a banner written by village elders to urge their urban sons and daughters not to visit their hometowns during the Chuseok holiday due to the coronavirus outbreak.

SEOUL, Sept. 28 (Korea Bizwire) — Various folk events and festivals annually hosted by local governments on the eve of Chuseok, the Korean equivalent of Thanksgiving, can hardly be seen this year, as they are now campaigning against small and large gatherings due to fears of coronavirus transmission.

Authorities in provincial cities and counties nationwide have been discouraging hometown visits and travel during the extended Chuseok holiday, which runs from Wednesday to Friday.

Taking more strident measures to prevent the spread of COVID-19, many local governments have canceled their perennial Chuseok celebration events and festivals to block gatherings of any size.

The Andong Maskdance Festival, scheduled to be held in the namesake city near Yeongju before and during Chuseok, has been canceled, while nearby Sangju has decided to close the Sangju Museum’s traditional play experience center and the Sangju Bicycle Museum’s bicycle experience center during the holiday period.

The Jeonju Bibimbap Festival, a signature event of the North Jeolla Province capital, about 150 km south of Seoul, that used to draw 150,000 citizens and tourists from home and abroad, has been canceled entirely this year.

The municipality of Jeonju once considered holding the bibimbap (a rice dish with mixed vegetables and meat) festival online in early October but has eventually announced its outright cancellation. 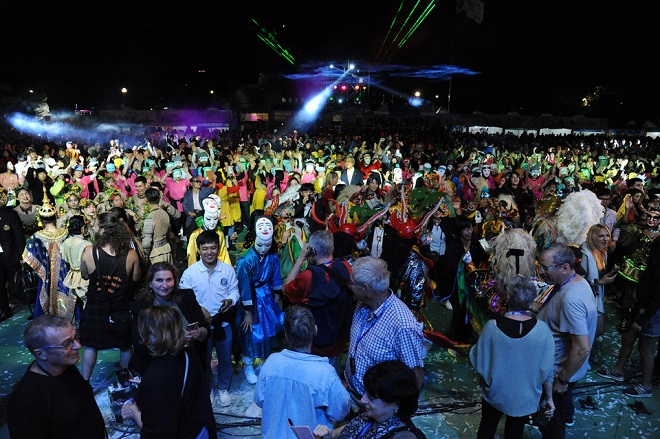 This file photo provided by the Andong City Hall shows the 2019 Andong Maskdance Festival held in the southeastern city. The annual festival has been canceled this year due to the coronavirus outbreak.

Smaller cities and counties in the southwestern Jeolla provinces have also canceled their own Chuseok events, such as a singing contest in Hwasun, a folk game festival in Gokseong and an autumn flower festival in Yeonggwang.

All public institutions on Jeju Island, the nation’s most popular holiday destination, have decided not to hold any Chuseok-related events this year, while the provincial government of Gangwon has asked all cities and counties to refrain from holding Chuseok events and gatherings.

The Ojukheon & Municipal Museum in Gangneung, an east coast city in Gangwon, has canceled all folk game and mask dance events that were held annually on the occasion of Chuseok.

The city of Gyeongju, the capital of ancient Korea, has also canceled all folk game events and outdoor performances, scheduled to take place at the Bomun Tourist Complex.