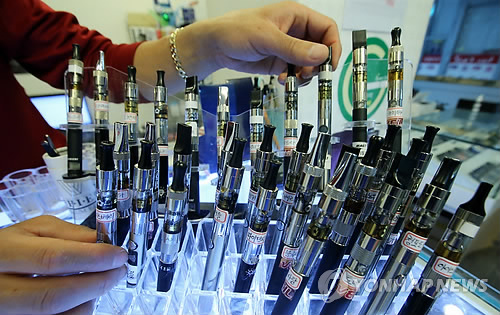 The government raised the average price of a pack of cigarettes by 2,000 won (US$1.84) on Jan. 1, pushing smokers to quit with the help of e-cigarettes. (image: Yonhap)

The government raised the average price of a pack of cigarettes by 2,000 won (US$1.84) on Jan. 1, pushing smokers to quit with the help of e-cigarettes.

A tally from the Korea Customs Service (KCS) showed cigarette imports dropped 14.4 percent last year from the year before, or $15.9 million in value, down from $18.57 million in 2013.

In terms of volume, South Korea bought 823 tons of cigarettes from abroad, down 15.4 percent from 973 tons the year before.

Imports of e-cigarettes, on the other hand, skyrocketed 342 percent on year to $10.14 million, with 138 tons worth of the products being brought into the country. This is a gain of 348.2 percent from the year before in volume.

The customs office said of the total imported last year, 75.4 percent were brought into the country in the fourth quarter of 2014, with 96 percent being made in China.

Most e-cigarette products did not come with liquid solutions used to simulate smoking, which explains imports of the solutions jumping 344.5 percent in value to $4.43 million with quantity gaining 283.8 percent to 66 tons.

Imports in the fourth quarter accounted for 73.6 percent of the annual total with 72.2 percent of e-cigarettes coming from China for the whole of 2014. Products from the United States made up 26.3 percent of imports.

The KCS said last year’s trend mirrors developments that have been taking place for some time. While there was a rush to import foreign cigarettes before prices went up, this did not affect the overall trend.

“A drop in imports and demand for e-cigarettes reflect the move by local smokers to cut back or opt for alternative ways to control their habits as society as a whole is moving to discourage smoking,” the customs office said.

Meanwhile, Philip Morris, one of the largest tobacco companies in the world, said over the weekend that it will cut local prices on its Marlboro and Parliament cigarettes as of Monday.

The two cigarette brands make up 75 percent of all sales in South Korea.

The latest move by Philip Morris effectively erased the price gap between locally made and foreign brands that have been maintained since 2011.