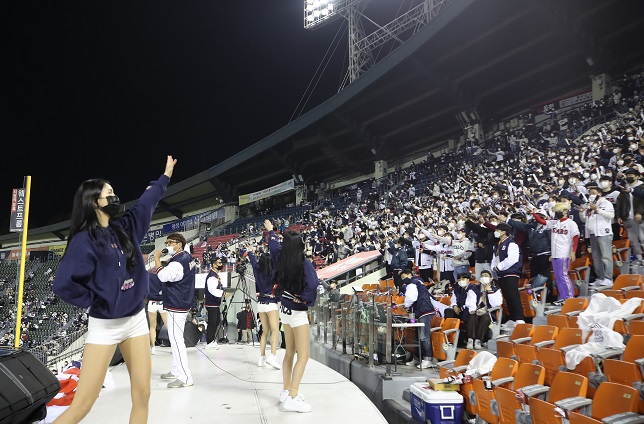 Fans watch the Korea Baseball Organization wild card game between the Kiwoom Heroes and the Doosan Bears at Jamsil Baseball Stadium in Seoul on Nov. 1, 2021. (Yonhap)

SEOUL, Nov. 2 (Korea Bizwire) — National health authorities on Tuesday called on baseball fans to refrain from chanting at stadiums, pointing to risks of spreading COVID-19 even among masked individuals.

Starting this month, the KBO decided to operate all stadiums at 100 percent capacity for the postseason, provided that fans are either fully vaccinated or have tested negative for the virus within 48 hours.

Eating and drinking from seats are now also permitted, which hasn’t been the case since the onset of the pandemic last year.

The first game under eased curbs took place Monday at Jamsil Baseball Stadium in Seoul, as the Doosan Bears hosted the Kiwoom Heroes in a wild card game.

In later innings of the Heroes’ 7-4 victory, fans started chanting and shouting players’ names, despite warnings through the PA system at the stadium.

“We’ll discuss this issue with the sports ministry, clubs and the KBO to make sure rules are followed,” Son told reporters. “Shouting and chanting will produce droplets, and it will reduce the effectiveness of masks.”

With eating now allowed at ballpark seats, Son said he was worried about baseball fans consuming food and chanting at the same time, citing infection risks with masks pulled below people’s mouths.

Minutes before the second wild card game at Jamsil on Tuesday, the KBO announced measures to prevent or at least discourage chanting, following the league’s meeting with officials and cheermasters from both clubs.

KBO players have their own songs that fans often sing along to after key hits or home runs, and the league office said those songs will not be played on speakers on those occasions.

Cheermasters will be responsible for reminding fans throughout upcoming games that chanting and singing are prohibited.

The KBO added that continued chanting may lead to stoppage of play on the field and fans will be encouraged to use clappers or ThunderStix to cheer on their teams.

Told that fully vaxxed sports fans in other countries don’t face restrictions on chanting, Son cited cultural differences between Asia and other parts of the world.

“In Asia, we put an emphasis on protection that masks provide, while there are still debates in the West,” Son said. “Getting vaccinated is the first step, but considering the spread of the delta variant, we believe masks are important as the last line of defense.”

South Korea is currently in the first of three stages to eventually return to normalcy during the pandemic. Son said vocal cheering will remain banned during the first phase, and he will continue to monitor the situation ahead of the next phase.